God as Conservative, Liberal and Progressive

The nature of time is such that people orient themselves around three possible worldviews, each of which is rooted in the past, the present or the future. Conservatism is all about the past, liberalism the present and progressivism the future. In essence, each is a type or phase of love. Each is love playing itself out at a certain beat to the dance of time. 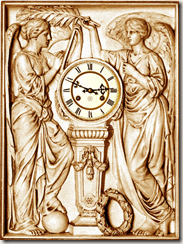 Conservatives Love What is Dead and Gone

Those who put the past first tend to be conservative. Conservatism is concerned with the ghost of culture past. It takes on the daunting challenge of learning from the experience of the Great Majority (it is estimated that, in spite of the recent spurt in human population, at least seven persons lived and died in the past for everyone living today). A conservative wants to carry the lessons of history into both present and future. Unless we do that, there will be no good at present or the future.

The prototypical agent of conservatism is the teacher. Many teachers, indeed perhaps most teachers may be liberal or progressive in personal taste and outlook, but professionally their burden is to see to it that the essentials in past knowledge are not lost. Imagine what would happen if all teaching and learning somehow stopped today. There would be a sudden collapse of civilization followed by a massive die-off. If any humans survive at all, they would be hunter-gatherers numbered in thousands rather than, as now, billions.

Who wants to be a conservative?

Conservatism is attractive to the powerful, anyone insulated from questions of brute survival. A conservative tends to be wealthy, since the rich are free to make many minor decisions in the here and now, choices that are rarely matters of life and death, at least not for themselves. Conservatives are happy with how life is treating them. They have enjoyed a prosperous life in the past and have secure prospects for the future. Anyone content with where they come from and where they are going will tend to be conservative. This is why conservatives tend to be older, and usually come from the dominant culture and speak the language of the majority. For them, the greater part of the struggle for influence and hegemony is already won.

What is the Conservative Value?

I think that wisdom is the great value that conservatism teaches. As one ancient philosopher puts it,

"Wisdom is a condition in a being that possesses repose. Think what happens when one has accomplished the reasoning process; as soon as we have discovered the right course, we cease to reason. We rest because we have come to wisdom." (Plotinus, qi Wisdom, Mortimer Adler, the Great Ideas, p. 939)

Liberals Love the Here and Now

The characteristic ability of intelligent beings is the exercise of free will. No decisions, no rational mind. If one cannot decide freely and independently, one is not entirely human. Decisions, right, wrong or indifferent, are part of our very reason for being. Our goal in life is to express ourselves, to exercise our personal freedom, and by that means to become fulfilled.

And when are decisions arrived at? Right now. Spend your time with the ghost of time present. That is the only time when it is ever possible to exercise the will. It is impossible to decide about what happened before or about what we think may come about sooner or later. That is why we ought to adore the present most of all. We should maximize what can be changed in the here and now. If everybody makes a sound free choice now, all other goods must come together for the best. Look to what is important at this moment and past and future will take care of themselves. Try to make free choice the default for every issue, for each social concern.

They tend to be individualists, happiest when alone with their own thoughts, living a solitary life of the mind. Personal choices matter more than socially derived decisions, if only because the latter cannot be done at this instant while social mores take a long time to determine. Like a ponderous, slow-turning supertanker, group decisions take even longer to alter course.

Who wants to be a liberal?

Liberalism is attractive to those who did not inherit great goods or lands from their ancestors, to anybody who is not nostalgic and has few memories, good or bad. That is, to youth. The decisions of the young have the greatest, longest lasting results. The old have already made the most important long-term choices, for better or worse.

Liberalism is also attractive to intellectuals. The learned are not heavily invested in past goods or future windfalls. They discount as uncertain the prospect of better things to come. Thought is more real than memories or expectations. They are confident that knowledge can make up for shortfalls in past or future. They delight in abstractions, look down on worldly goods and are willing to invest everything in the fleeting will-o-the-wisp that is the present moment.

What is the Liberal Value?

The virtue for liberals is justice, for what good is a decision if it is not the right decision? Justice takes in all other virtues, except for the conservative virtue, wisdom. Wisdom is the ability to see what was right in the past, justice is what is right at the moment. It is, as Baha'u'llah puts it, a kind of torch to be shone on what is right now.

"The light of men is Justice. Quench it not with the contrary winds of oppression and tyranny. The purpose of justice is the appearance of unity among men." (Baha'u'llah, Tablets, 66-7, Kalimat-i-Firdousiyyih, 6th leaf)

Progressives Love What is Coming Our Way

The belief in progress assumes that things now are better than they were, and we can make our future better than things are now. The future is the soul of past and present; whether we want to or not, we only see the past or the present in terms of what good it will do in future. Anyone who accepts such presuppositions as valid -- or at least desirable -- will value the future more than the past or present. Forced to make a choice, they will pick the future.

Progressivism, then, is a kind of optimism. However, a progressive does more than idly hope for a better future. He or she works to assure that the best is yet to come. Furthermore, a progressive believes that we spend our time most productively if we are anticipating future good and ameliorating what we have now. This means sacrificing what we had in the past and what we have now for future benefit. This is not easy to do. It is far easier for a progressive to show cowardice, to drop out or slip into hypocrisy than for a conservative or liberal.

Who wants to be a progressive?

Progressives have often had a miserable past. They tend to be excluded from participating in decision making in the here and now. They have good reason to invest everything in the future. The poor majority of humanity, I think, are progressives. Hence the saying, "Blessed are the poor." God is a progressive. The supreme example of a progressive is the Manifestation of God. Baha'u'llah said, "My object is none other than the betterment of the world and the tranquillity of its peoples." (Gl 286)

What is the progressive's virtue?

When we have wisdom and justice established in heart and mind, we can turn towards our ultimate purpose, the love of progress. Baha'u'llah makes it abundantly clear that whereas in the dispensation of Christ "God is love," today in effect, God is progress. The virtues that progressivism calls for are, socially, wisdom and justice. But for the individual, they are the "female" virtues of dignity, forbearance, mercy, compassion and Muhabat, or loving-kindness.

"All men have been created to carry forward an ever-advancing civilization. The Almighty bearest Me witness: To act like the beasts of the field is unworthy of man. Those virtues that befit his dignity are forbearance, mercy, compassion and loving-kindness towards all the peoples and kindreds of the earth." (Baha'u'llah, Gleanings, CIX, p. 215)

Posted by badijet@gmail.com at 2:46 PM