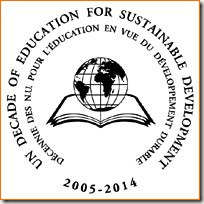 An inability to carry out plans over the long term has long been among the most galling stumbling blocks of governance. Temporal considerations are the fatal flaw of democracy.

As presently organized, the system does not permit programs or policy to look forward much further than five or ten years. This is the maximum length of a party or head of state's term of office. At best, a career parliamentarian who is re-elected several times in succession benefit from slightly longer hindsight. However, since the outcome of each election is uncertain, even this fortunate leader does not have the luxury of planning more than a few short years ahead. 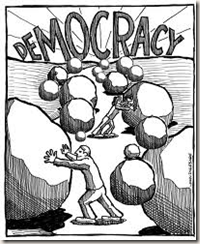 Our utter blindness to the long-term is especially dangerous as we confront the challenge of global climate destabilization. We need a complete turnaround of thinking followed by painful sacrifices, and not just right now but over many decades and centuries.

It is ironic that an individual who is shortsighted can buy glasses or undergo laser surgery, but we have no corrective for shortsighted leadership, even in the face of dire threats to survival. Traditionally, royal houses and aristocracies took a longer perspective over several generations by including leadership as part of a family's heritage. In business, family owned concerns, if the heir proved competent, could take a longer view as well. Short of reintroducing such institutions, which have alas been largely discredited, political science is completely out of ideas for corrective techniques. 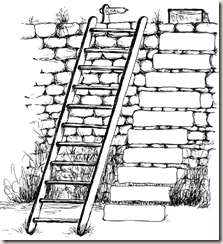 Panorthosia, or Universal Reform, starts out declaring that it is not enough to reform a part of the human condition. We must lay aside all prejudice and complacency, be it in science, religion or politics. Reform must be universal and all-embracing if it is to work at all.

"Come, let us proceed to draw up plans of action, all intent upon reform, and with God's help restoring salvation and glory to all things universally." (Panorthosia II, Author's Introduction, p. 43)

Later on, Comenius argues against co-religionists who would take the following directive of Christ to a nascent church as an excuse to reject planning, "It is not for you to know the times or the seasons which the Father hath put in His own power." (Acts 1:7) This has to be understood in the light of eschatology, he asserts, the teaching that in the "time of the end" there would be a grand unification. This too is God's will. People of faith one day soon must come together in common cause with philosophers and worldly powers to inaugurate a an age of peace, a time where conditions will be "on earth as it is in heaven."

At the end of Panorthosia, Comenius suggests that leaders hold a global constitutional convention, which they could repeat regularly at ten year intervals thereafter. At this global conference elections would be held among delegates from continental governments. At the same time, they would engage in detailed discussion about retrospect and prospect, and what plans and policy to devise to reflect that. Here they would share their experience serving on continental governments, and out of that perspective would emerge planetary policy. 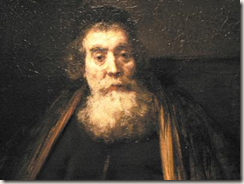 The fact that this all-important gathering takes place every decade is, I think, a stroke of genius, perhaps Comenius' greatest contribution. The publicity surrounding this epoch making event will be the perfect opportunity to broaden our stunted vision. As long as a global constitutional conference is being held every decade, it is only natural to carry the procedure further. It can be the starting point for a full scale, global ten year plan.

Based on my study of Panorthosia, and inspired by many other cosmopolitan thinkers, here is how a cyclic global plan might be organized.

The first year of the decade is devoted exclusively to personal reflection. Individuals are encouraged to spend time alone, reflecting on their lives and their potential contribution to the progress of earth. The title of this year is the Year of Enlightenment, or Release from Tutelage -- after an expression of Immanuel Kant in his suggested sketch of a world constitution.

The following nine years take off from this point to wider service to humanity. Each of the three Comenian institutions is given three successive years in which to bask under the full glare of global publicity. This regular progress consummates an election campaign held during the last year of the institution's three year cycle. Here is how the decade, divided into three triads, looks:

Year One: Enlightenment (run by each individual world citizen)

First Triad; Philosophy (under the aegis of the College of Light)

Second Triad; Politics (under the aegis of the Dicastery of Peace)

Third Triad; Religion (under the aegis of the interfaith Consistory of Holiness)