Men in the House 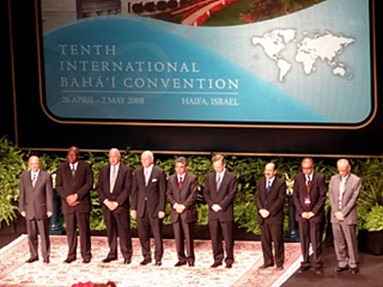 The following I wrote a few years ago and a friend has asked to see it. So I am reposting it, slightly revised. It is my take on one of the most frequently asked questions we get, why no women on the UHJ?

Why, why are only men allowed on the Universal House of Justice? Why, why, are only men obliged to go on pilgrimage in the Baha'i Faith? What is the wisdom of this apparent skew towards the male element?

In August of 2005 I found an article in Time Magazine about a Christian minister in the States who has taken upon himself a personal "mission to the men." He pointed out that over sixty percent of the membership rolls of Protestant churches, and something like eighty or ninety percent of their active membership, are female. In those conservative sects where women clergy were suddenly allowed, the number of female leaders shot up from zero to, again, ninety percent or more in only a few years.

He said that male church members who do turn up complain about the artsy-fartsy services chosen by the gals, singing, dancing and lovey-dovey sentiment. All that good ol' rootin' tootin' hell, damnation and brimstone are a thing of the past. To my surprise, this pastor with the mission to the men negatively compared female-dominated Christianity to Islam, the world's fastest growing religion, which gives a bigger place -- to say the least -- to men.

I cannot say that I found this man of God's approach to attracting males to religion all that interesting. Taken to an extreme, he would be hiring wrestling announcers as preachers and staging mini-football games behind the pulpit to keep the fleeting interest of male congregants from flagging.

Nonetheless, he has a point about men in religion generally. This is driven home every time I attend Feast here in Haldimand. While we have one or two other men who turn up sporadically (depending, I suppose, upon the NHL hockey schedule), usually in a roomful of women the only males are myself, Ron, and my six-year old son, Tomaso. This imbalance is not obvious in communities with a Persian element, since they resemble Muslims in that men tend to be as active, or more, than women. A male exodus, it seems, is characteristically Western. 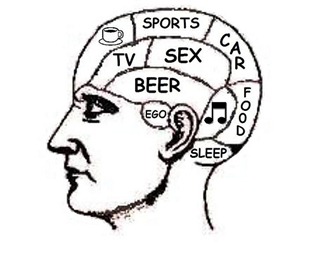 So, suppose that in setting up ground rules for male involvement in religion Baha'u'llah was not trying to maintain the last bastions of a rotten, patriarchic, male-dominated old order. Was He rather looking to the new Order? Was He pointing a divine finger at the face of men in developed lands, saying:

"Do your duty to God. You have a responsibility not to lose yourselves in freedoms to indulge in wine, women and sports. Do not blow energy on selfish pleasure. You must take a positive role in society, religion, and particularly in family life. Yours must be a partnership with women but also take on a leadership stake in the family. That is why you are the nominal head, so that you will keep your family name going through many generations, at whatever cost to you personally. By inclination men are selfish and altruism comes harder. So fight your inclination to flee family life. Join in not because you are forced to do so or for personal power but because this is the best moral course for you. The mark of male maturity is that ability to plan restrained, consultative initiatives; this is also the best impetus for spiritual progress. The balance of virility of family as an institution depends upon you, and hence of politics and democracy generally."

And what exemplar do you have, men? Well, there is the Master for one. One novel insight came to me reading Myron Phelps’ book, the first ever written in English about `Abdu'l-Baha, called The Master in Akka. It has a mini-history of the Faith not in `Abdu'l-Baha's words but His sister Bahiyyih Khanum's words. She gives a female perspective, but Western men especially should read this eyewitness account in its entirety (I would like to make a video of it, with my daughter Silvie as narrator). Here is what I gleaned from what she said about `Abdu'l-Baha as paterfamilias:

His charitable initiatives did not go unnoticed in family circles. He gave prodigious amounts of money to the poor and indigent at times when the family was by no means prosperous. This, it seems, was especially galling in the female "andarun", mothers, daughters and sisters. I had imagined the Master's "extreme charity" might have provoked grumbling but it was the first time I saw it mentioned in print.

What does this mean?

Our Exemplar was unstinting, even at the price of family prosperity, on behalf of the poor. His leadership was unrelenting, tough, but not -- God forbid! -- in the sense of male oppression. Quite the reverse, this was the reverse, the much harder path of relieving poverty and ending oppression.

So, men, if you want to do your duty, turn all your money and energy to ending poverty and indigence locally and in the world. Turn off the Stupid Bowl and the Sadley Cup for a while, and act, plan, for an end to oppression and tyranny. When they are stamped out, then you can think about a watching rather than playing a sport, but not before. 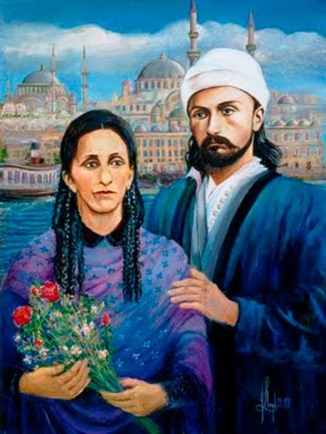 Bahiyyih Khanum also tells the story of the Master as father. Like most parents in an age before antibiotics, He and the Holy Mother Munirih Khanum underwent the unimaginable trauma of losing five of nine children, most at a young age. Only four offspring survived, all girls. Long story short, tremendous pressure by the believers was brought to bear upon Father and Son to bear a male heir. The Covenant, the Prophetic succession, the future of the Faith itself hung upon primogeniture, the eldest boy taking over leadership. And only girls were making it through childhood.

Surprisingly for many (for me, at least), Baha'u'llah did not stand in the way of a second spouse for His Son, `Abdu'l-Baha; that would have meant more chances for a male heir, and the Kitab-i-Aqdas did not forbid taking on a second wife. According to Bahiyyih Khanum, Baha'u'llah stood back and intentionally did not forbid `Abdu'l-Baha from marrying, saying in effect, "If He wishes He may do so, nothing stands in His way." The Master, having the decision left to Himself alone, interpreted the clause in the Aqdas allowing two wives max as effectively enjoining monogamy since it had stipulated that a second marriage was conditional upon justice, peace and harmony, and that is impossible in a ménage-a-trois.

Why the sidestepping? Why was polygamy not just directly forbidden in the Book? Clearly, there is a lesson here, one especially aimed at men as fathers and heads of families. Our exemplar had His chance, a decision on His shoulders alone, and He made it. It is well known that He had had a personal dislike of privilege and inequality from His earliest days. Though He could have taken a second spouse legally and answered expediency with a chance at a male heir, He freely elected not to and was no doubt upbraided by some of those concerned.

One example on top is especially hard to ignore right now. Decades after Shoghi Effendi talked about an "age of responsibility," "The Baha'i era is ... the age of individual responsibility." (Shoghi Effendi, Messages to the Indian Subcontinent, p. 118) A certain American president started his administration by paying lip service to a "culture of responsibility," yet he ignored cheap and simple preventive measures that would have averted the flooding of New Orleans. A city that was poor and largely Black, an unpleasant burden ignored by the slacker "father" of the world's wealthiest nation. Meanwhile every time a privileged hand was extended to him, he could not say no, to the extent that the national debt has expanded to the point where there is talk of economic collapse in the world's wealthiest nation.

Male lack of responsibility extends all the way down the totem pole. Now most young men regard higher learning as "uncool," and are staying away from universities in droves. Same way, mounting debt, both personal and national, is putting our future in hock. The next generation will also have to clean up the pollution and greenhouse gases resulting from flagrantly irresponsible decisions made by largely male leaders. This is the reverse of the model of virility and manliness in the cause of doing good that was shown by the Exemplar.

As Baha'is we believe that the only thing that will ever shake us out of our stupor is a crisis. Men of the next generation will pay for this blasé attitude about the way to make a better future for ourselves.

"Nothing but a fiery ordeal, out of which humanity will emerge, chastened and prepared, can succeed in implanting that sense of responsibility which the leaders of a new-born age must arise to shoulder." (Shoghi Effendi, The World Order of Baha'u'llah, p. 46)

We men need a palm to the forehead to suddenly remind us of our responsibilities, to get us to renounce our blind adherence to the cult of elite sports and get us to serve humanity with all our force. What better body can do this than an all-male Universal House of Justice? 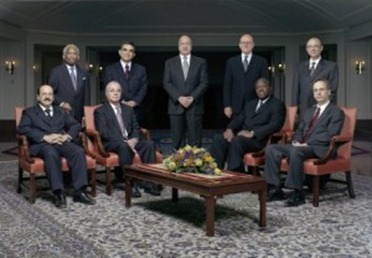 Posted by badijet@gmail.com at 5:21 PM