Towards a Pinocchio Law

Foolishness in the News, 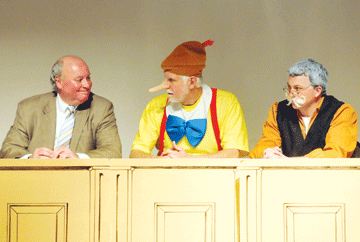 There are several chapters in my book-in-progress on John Amos Comenius and Panorthosia that deal with wisdom. Universal wisdom, pansophy, is, for him, a precondition of world order.

As I write about wisdom and pansophy, I try not to comment on the news. If I do that too much, I will surely never finish this book.

But the nuclear disaster in Japan made it very hard. What kind of ship of fools would build nuclear reactors in the most earthquake and tsunami prone area on earth? We are talking folly on an epic scale. Really, it is amazing that an entire industry can lie in the faces of the public for so long and not suffer any consequences. I have seen proposals for making the telling of lies illegal. Call it a Pinocchio law. In this case surely, somebody should go to jail for blatant mendacity under Pinocchio legislation. Trouble is, the government of Japan has been doing the same thing to the people from the day the crisis started. Who do you appoint to guard the guardians? Meta-guardians?

George Monbiot is going around defending the nuclear case, based on holes he found in a debate he had with Helen Caldecott. He is missing the point. The point is that no nuclear power has ever been generated without heavy subsidies from us, through government. If an economic activity is not economical and it is impossible for insurers to back it up when things go wrong, then what better reason could there be to shut the whole industry down immediately and never look back? 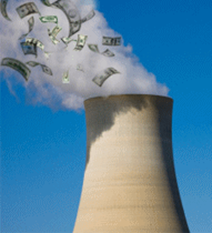 The more news I read, the harder it is to shut up. For example, President Obama railroads the UN and NATO to attack Libya, has U.S. planes lead the assault, then remembers that he is required by the U.S. constitution to inform Congress before engaging in hostilities. Oops. Obama is a law professor advised by dozens of legal experts. How could a blunder like that slip by?

Then I ran across this, from Kant's famous peace plan. It expresses one's feelings exactly.

"One cannot suppress a certain indignation when one sees men's actions on the great world-stage and finds, beside the wisdom that appears here and there among individuals, everything in the large woven together from folly, childish vanity, even from childish malice and destructiveness." (Immanuel Kant, Idea for a Universal History from a Cosmopolitan Point of View, 1784, http://en.wikiquote.org/wiki/Immanuel_Kant)

In setting up a Pinocchio law, all you have to do is set up a leader board where the truth of any public statement is measured according to factual results determined later by statisticians and other experts. Any statement by a public figure should be displayed visually for all to see, if only on the Web. If the facts vary from what is stated by them, have a portrait of that public figure grow its nose a little longer. Once it stretches beyond a certain point, jail time or fines or some other punishment can normalize the image.

Again, this is derived from a divine teaching, "by their fruits ye shall know them..." Socrates, according to Xenophon, talked about the same idea. We just have to visualize and put into graphic form, what he describes.

A few months ago, I audited Karen Armstrong's book, Muhammad: A Biography of the Prophet (2001, from Orion Publishing). 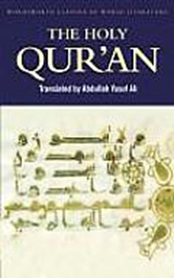 Two quotes from the Qur'an jumped out at me and bit me on the nose. I have been keeping them in a safe box, but I take them out now to show you, very carefully. To me, they are making some very advanced points about evolution. The first talks about cultural evolution.

"Unto every one of you We have appointed a (different) law and way of life. And if Allah had so willed, He could surely have made you all one single community: but (He willed it otherwise) in order to test you by means of what He has given you. Vie, then, with one another in doing good works! Unto Allah you all must return; and then He will make you truly understand all that on which you were wont to differ." (Qur'an 5:48)

It is important not to miss what is being said here. We have many cultures, languages and races for a divinely inspired reason. God wants it that way. He does things for a reason. The market fundamentalists did not invent the idea that competition is a good thing. It is a teaching of God. He encourages groups to work apart and vie with one another in excellence, and everybody benefits from the invisible hand -- another religious teaching that did not come from Adam Smith or any other economist, it is scriptural.

Abdu'l-Baha, in one of His letters to Dr. Forel, pointed out that the Genesis myth, so often used in opposition to evolution, in fact, is the origin of the whole idea of evolution. It starts off telling how God created light, then earth, then animals, and so forth until humans came along. The entire idea of good coming out of fair competition, in nature, in human ideas, it comes from God's teachings.

The other Qur'an quote talks about the good in other faiths. Muhammad looks back at older faiths, Judaism, Christianity, and points out that there are pious believers who, again, "vie with one another in good works." Religion is in essence not a field for self-congratulation on being right while others are in error. It is not even a place where ideas or groups compete; it is a fraternity where true believers lovingly compete with one another in virtue, not as many lamps under many bushels, but in showing one light to the world.

"[However] They are not all alike. Among the People of the Book there is an upright community who recite the revelation of God during the night and fall prostrate before Him. They believe in God and the Last Day, enjoin what is right and forbid what is evil, and vie with one another in good works. They are of the righteous and whatever good they do, its reward will not be denied them. God knows those who fear [Him]. (Qur'an 3:113-115)

Baha'u'llah says something parallel when He declares that this faith is not a "field for the foolish and faint of heart," it is a jousting field where you a charger and fight your spiritual battles in the name of God.

"This is not a Cause which may be made a plaything for your idle fancies, nor is it a field for the foolish and faint of heart. By God, this is the arena of insight and detachment, of vision and upliftment, where none may spur on their chargers save the valiant horsemen of the Merciful, who have severed all attachment to the world of being. These, truly, are they that render God victorious on earth, and are the dawning-places of His sovereign might amidst mankind. (Baha'u'llah, Kitab-i-Aqdas, para 178, p. 84) 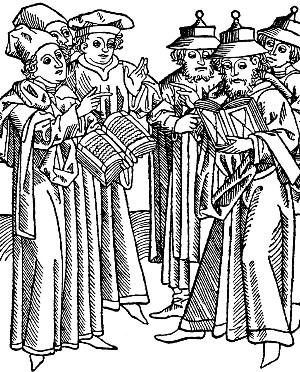 This describes the divine art of struggle and competition, a battle to remove folly, arrogance and insolence at the root. It starts within, it starts with the self-assessment that Baha'u'llah prescribes for us all, every day, every moment of our lives. Anything that visualizes and charts our progress in this regard, has to be welcomed by us, and by all, for ultimately the question, "Who will guard the guardians?" has to be our own vigilant selves in living up to the Covenant.

Posted by badijet@gmail.com at 2:23 PM

Hi, using our daughter's computer, so too much trouble to sign in and out
in your last comment, and quote, I think are the best, I would add the reference that we should take ourselves into account each day. How rigorous should our bookkeeping be? And in bookkeeping, one day 's credit or debit is carried over;Secondly it would be written down, in some manner; thirdly, there is a link from one day to the next going back as far as.... I wonder how many do that?

Regarding Japan's situation, and even let's suppose I was a shopholder in some Libyan town. I shouldn't worry about assigning blame. It wouldn't help me survive any more successfully. And, on another hand, if we are in the audience watching these plays, I suppose it adds spice to encourage a spirited debate, as we in the West love to do,to get a mental sparkle....Objectively, no harm is there in that? And yet, as too often seems to be these days, we carry things to excess, all for the sake of entertainment, I suppose. We don't have to wait for some American Bard to generate a work that interprets history-in-the-making. If we know how to reach the contacts in the right places, we can read a live feed of what they know (and don't know).

So, I won't pretend to know any more than you do about the basis of decisions made in the 1970's by the Japanese gov. or just recently by Pres. Obama . Not because I'm trying to compete with you in a Holier-than-Thou contest, but because I came to this conclusion when I worked as a reporter for a small town in AK. I was dealing with much simplier issues than the ones referenced here, yet, still, the fundamental principles of attribution of motives, blame, intention, etc were in effect. I could never really know then Why Myrtle Jacobson didn't attend the mayor's wife's birthday party for her dog, and I don't know why DaiIchi is where it is and not some other place . Only God knows. And He hasn't told me, yet.
Going forward, should we expect honorable members of the Old World Order to make much better decisions than they have in the past?