Thoughts from an Evening at Home

Strained Mercy, and Other Musings

I have been relaxing, having finished my first draft of Cosmopolis Earth, and sent it off to a copy editor. Last night was a typical evening.

The Spirit Within Club

The Spirit Within Club

For Tommy's almost daily Baha'i class (Silvie, at 17 years, no longer deigns to attend) I continued reading aloud from a youth novel called "The Spirit Within Club," by Sahar Sabati, a Montreal believer now serving in the Holy Land. I typically read a chapter, but Tomaso always insists on hearing two or three more chapters, which shows what a good writer this fellow is, I guess. The Spirit Within Club was written to point the way the Ruhi program sees kids leading the community and the faith, and it seems to do a pretty good job of that. I am actually quite surprised that Tomaso takes such an interest in it, what with all the explosions and hijinks in the books, movies and games he usually likes.

The author contacted me through the now largely dormant Badi Blog, and sent us a prepublication copy of this novel, targeted at 8 - 14 year olds, which, he tells me, has been published by George Ronald and should already be available in your friendly national BDS. When we are done reading it, Tommy and I will be interviewing Mr. Sabati by Skype. I hope to share the results with you on this blog.

When the Baha'i class was over we said a prayer for Sam, a member of our Baha'i community who just passed on. Sam was totally paralyzed by a brain stem stroke, but when his wife declared and they asked him if he wanted to be a Baha'i too, he said yes. I do not know how they communicated that, or anything else, since he is totally motionless. He reminds me of one of my most admired believers, Evelyn Knight, of whom I often speak here. She was a victim of Down's Syndrome, yet she was an active believer in a big city where it was hard to be an active believer, even for those with far more natural abilities.

Evelyn was always an inspiration to me, but not Sam, at least not when he was around. I must say, Sam was quite a test.

During meetings, every fifteen minutes or so, Sam's wind pipe got clogged, his breathing became heavy and obstructed and it sounded like he was about to suffocate. His nurse or wife would then fool around with some tubes, switch on a loud machine and it would clean out whatever it was that was clogged. He was a Baha'i about three years, and no matter how many feasts and firesides I attended with him, I never got used to that. I was always convinced that he was about to die, the adrenaline would pump through my system and I lost track of whatever else was going on in the meeting.

But again, the fact that this fellow, who evidently was an accomplished artist and craftsman before the stroke hit, even became a believer and stuck to it to his last day, is itself testimony to some kind of spiritual current running deep down things, way beyond the comprehension of us dwellers of conscious material life.

I guess we do not call them "grace," like Christians do, but the Master did reveal two mealtime benedictions when he was staying at the fantasy ranch of Phoebe Hearst, where the meals must have been pretty big and formal. It was 99 years ago, almost to the day that this happened (16 September). Here they are, from Balyuzi's bio,

Mrs. Hearst recollected also the effect that the chanting of an Arabic prayer had had on her all those years ago in 'Akka, and expressed her ardent desire to hear such a prayer once again. 'Abdu'l-Baha's voice rang out powerfully as He acceded to her wish and chanted a prayer in Arabic. The other guests sat spellbound, although they were not familiar with the  308  language. The second day at the luncheon table, when asked to say a benediction, He uttered this prayer:

"He is God! Behold us, O Lord, gathered at this board, thankful for Thy bounty, our gaze turned to Thy Kingdom. O Lord! Send down unto us Thy heavenly food and blessing from Thee. Verily, Thou art the Generous, and verily, Thou art the Beneficent, the Merciful."

And at dinner on the 15th He spoke this prayer:

"He is God! O Lord! How shall we thank Thee! Thy bounties are limitless, and our gratitude but limited. How can the limited render thanks to the limitless? Incapable are we of offering thanks for Thy mercies. Utterly powerless, we turn unto Thy Kingdom, and beg Thee to increase Thy bestowal and bounty. Thou art the Giver, Thou art the Bestower, Thou art the Powerful."

Before departing for San Francisco on the 16th, 'Abdu'l-Baha asked to see all those who served in Mrs Hearst's household: maids, pages, groom, cook.

"Warm his cool heart," A Portrait of Portia and Shylock

The Merchant of Venice, The Sequel

After reading the Baha'i stuff, Silvie and I continued our reading of Shakespeare's play about racism, The Merchant of Venice. I took most of the male roles and Silvie the female ones, except when she did not, in which case the drama came from our disputes as to who reads what role. Last night we covered acts three and four, with the action climaxing in two sub-plots. It was so gripping, in spite of the often obscure references and word play, that Tomaso stayed at the table to quietly play with some walnuts and Mom ceased her Czech blogging to discretely listen in.

I have been kind of stuck on the idea of writing a series of sequels to Shakespeare's plays. We all enjoyed "Hamlet II," an indie film about a play about an artsy English lit teacher who writes an indulgent ego piece about Hamlet II and stages it in the local high school. In November there is a "write your own novel in a month" challenge, and I am kind of thinking of doing a novel about events after one of the Bard's plays, now that my main book is written. Silvie was thinking along similar lines, because she stayed up late to draw the following drawing. 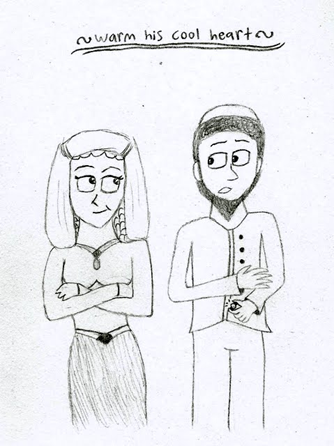 This is her idea of what happened after Shylock had been deprived of his fortune (by Portia's ruling) and forced to become a Christian. Portia comes to him discretely and passes over to him the ring that his dead wife, Leah, had given him during their courtship. A touching proof that she had meant it when she said, "The quality of mercy is not strained..."

This site is going the rounds, a way to find out for sure, no matter where you may be,  in what direction to pray.

This is an amazing device. Turns out that for all these years I have been praying to a bathroom in Tunis rather than the correct point of adoration, which is in Bahji.

Such is human frailty.

But, as the Qur'an (24:35) says, God's revelation is "neither of the East nor the West," so It must be in every direction. So I guess I could not have been that far off.

By the way, do not confuse the Badi Blog with Badi's blog, http://www.myspace.com/badimusic/blog. No relation. 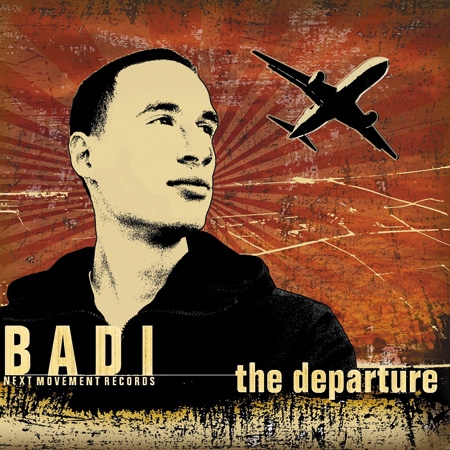