What is religion? (your definition) 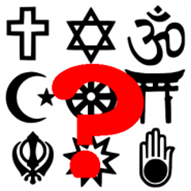 My daughter was asked in her world religions class to answer this question in two or three sentences. I am tempted to do the same. So I will, except that I will devote an entire essay, covering also questions like, What is my definition of religion? What is religion to me? What are the best definitions of religion I have found in my reading?

My slightly cheeky personal definition of my religion, the Baha'i Faith, is "people who sit around in a circle and read from books." This describes, physically, what we do in our meetings, at least 95 percent of the time. Admittedly, sometimes we sit around a table, which may be square, and read aloud from books. But still, this pretty much describes what Baha'is do. So, when we say "study circle," the emphasis is on "circle." Such is the importance of equality in our scriptures. 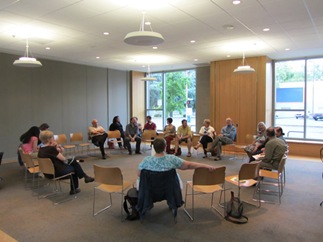 There has been effort recently to update this definition to "people who sit around in circles and recite." If we memorize enough from our holy writings we will not need to read aloud from books anymore, we will have it by heart. Maybe future generations of believers will memorize enough that my original definition will need to be revised. However, there is little sign that the sclerotic brains of believers of my generation can make such a change.

Facetious as my definition is, it is not without precedent in earlier religious teachings. According to the Qur’an, the definition of a believer is someone who hears the word of God (be it read or recited, be it read, intoned or chanted) and is changed and uplifted by the experience. The,

"true believers are those whose hearts are filled with awe at the mention of God, and whose faith grows stronger as they listen to His revelations." (Q8:3)

Or, as Christ put it, "The sheep knows the voice of the shepherd." Indeed, this reading aloud refers literally to what the word "Qur'an" means in Arabic, "dictation" or continuous recitation. It is what the Prophet or Manifestation does, and learn and follow is what we do. 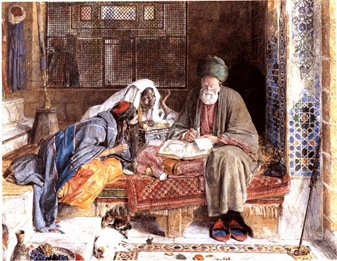 The Qur'an furthermore emphasizes that once we are filled by reverential feeling by hearing the Word, it is not enough just to wave our hands in the air and say, "I believe," we must obey and enact what the Word says, "Do not say you believe, say you submit." Thus religion is not a belief or system of beliefs, it is what the word "Islam" means, submission to the Will of God. Earlier faiths taught the same thing.

Abdu'l-Baha, in a passage that many Baha'is have memorized, defines religion as a process that begins, yes, in submission to God, but also one that has a final purpose, to change conditions that lead to progress for the human race.

"Religion ... is not a series of beliefs, a set of customs; religion is the teachings of the Lord God, teachings which constitute the very life of humankind, which urge high thoughts upon the mind, refine the character, and lay the groundwork for man's everlasting honour." (Abdu'l-Baha, Selections, 52-53)

Posted by badijet@gmail.com at 4:30 PM