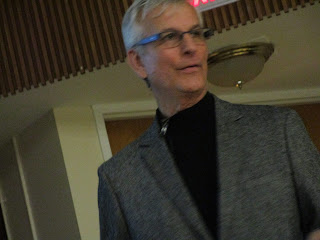 Submitted to the Dunnville Free Press, 1 May, 2016

On April 27 the Dunnville and District Heritage Association (Motto: "There is no dust on this history") held its second public talk this year, entitled: "The No. 6 Service Flying Training School." Featured speaker was the new curator there, Peter Gay, son of Flight Sergeant H.E. Gay, who underwent flight training at that facility during the Second World War. His father had told him tales about his adventures. After he died, Peter Gay researched his father's war record and discovered our No. 6 RCAF Dunnville Museum. Now he is its vice-president.

Gay discussed the role of the training program in the grand strategy of Winston Churchill and Prime Minister Mackenzie King. Canadians should be proud, he said, of the rapid implementation of a program that took advantage of our safe distance from Europe by training the flight crews for the air forces that defeated Hitler. Over 17,000 aircraft were used and thirty thousand pilots were trained, of whom over eleven thousand were Canadians. The entire training facility here was built in less than a year, under harrowing conditions of mud and cold.

He shared many of the stories told to him by the old timers and relatives who regularly visit the museum from around the world. For example, sports played a great role in life on the base. The men of the school actually won the Grey Cup. They held a hockey league with its own version of the Stanley Cup." The base featured a large victory garden. Even the camp mascot, whose name was "Rochester," a Labrador retriever has his own memorial stone on site. The museum is currently installing new LED hanger lights and will soon open a new display area and entrance way. One of its planes that crashed in Lake Erie will soon be salvaged and restored.

Gay described its rapid progress of this Museum after its opening in 2003. As a flight school it had a huge impact on our small town during the war. Many visitors to the Museum and members of the audience recalled the airplane flyovers. Many had relatives who worked there, and attended dances and other events. Some played as children in a derelict bomber abandoned in a local woodlot.

There are ambitious plans to expand and restore the entire site to its original wartime condition. In many ways, it is unique. It is the only part of a vast training program to have been preserved relatively intact. This part of our Canadian heritage was almost lost, however. When the flying school was closed down in 1945, the buildings turned into a storage depot and eventually sold to become a turkey farm -- to the great resentment of the veterans who had trained there.

The Heritage Society plans three talks for the fall. A local explorer visits in September, we will hear about native poet Pauline Johnson in October and in November will be the conclusion of a series on the fates of Dunnville soldiers in World War One. 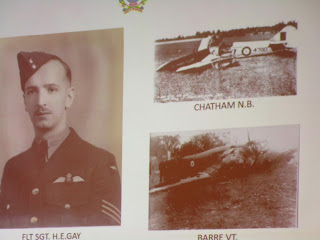 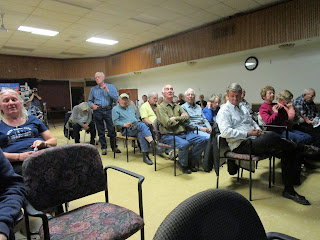 These and other photos for this article are available at: