p01 Bacon Against the Mere Search for Truth

John Amos Comenius based his entire philosophy, which he called "Pansophy,"and indeed his entire proposed world government, on the three necessary stages of intentional action, that is, knowledge, volition and action. Comenius, and indeed all subsequent science, rest upon this foundation, first laid out by Frances Bacon. It was Bacon's conviction that mere search for truth is not enough. Knowledge has to be connected to human decisions, and decisions connected to work and action. If an individual's search is left on its own, how do you know when to stop? It has to be when you are satisfied. But satisfaction is not enough. Knowledge is power, and power can only be released by constant application; that is, by establishing a dialectic among all three, knowledge, willing and acting, and repeat. First comes seeking to know, then, forming a resolution based on what you learned from that search, and finally applying that to your life's calling. Because this dialectic is so important to understanding Comenius, I am including here the entire section from the article on Bacon in the Encyclopedia Britannica.

Frances Bacon; Against the Mere Search for Truth

from the article "Frances Bacon," in the Encyclopedia Britannica 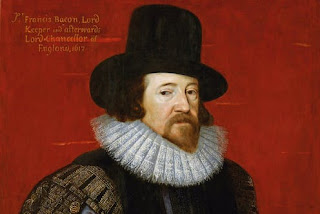 Bacon's grand motive in his attempt to found the sciences anew was the intense conviction that the knowledge man possessed was of little service to him.
"The knowledge whereof the world is now possessed, especially that of nature, extendeth not to magnitude and certainty of works."
Man's sovereignty over nature, which can be founded on knowledge alone had been lost, and instead of the free relation n between things an the human mind there was nothing but vain notions and blind experiments. To restore the original commerce between man and nature and to re-establish the dominion of man (imperium hominis) is the grand object of all science. The want of success which had hitherto attended efforts in the same direction had been due to many causes but chiefly to the want of appreciation of the nature of philosophy and its real aim. The true philosophy is not the science of things divine and human; it is not the search after truth.
"I find that even those that have sought knowledge for itself, and not for benefit or ostentation, or any practical enablement in the course of their life, have nevertheless propounded to themselves a wrong mark, namely satisfaction (which men call Truth) and not operation."
"Is there any such happiness as for a man's mind to be raised above the confusion of things, where he may have the prospect of the order of nature and error of man? But is this a view of delight only and not of discovery? of contentment and not of benefit? Shall he not as well discern the riches of nature's warehouse as the beauty of her shop? Is truth ever barren? Shall he not be able thereby to produce worthy effects, and to endow the life of man with infinite commodities?"
Philosophy is altogether practical; it is of little matter to the fortunes of humanity what abstract notions one may entertain concerning the ultimate nature and the principles of things. This truth, however, has never yet been recognized; it has not yet been seen that the true aim of all science is "to endow the condition and life of man with new powers or works," or "to extend more widely the the limits of the power and greatness of man."
Nevertheless, it is not to be imagined that by this being proposed as the great object of search there has thereby been excluded all that has hitherto been looked upon as the higher aims of human life, such as the contemplation of truth. Not so, but by following the new aim we shall also arrive at a true knowledge of the universe in which we are, for without knowledge there is no power; truth and utility are in ultimate aspect the same;
"works themselves are of greater value as pledges of truth than as contributing to the comforts of life."
Such was the conception of philosophy with which Bacon started and in which he felt himself to be entirely original. as his object was new and hitherto unproposed, so the method he intended to employ was different, he felt, from all modes of investigation hitherto attempted.
“It would be," as he says, "an unsound fancy and self-contradictory to expect that things which have never yet been done can be done except by means which have never yet been tried."
There were many obstacles in his way, and he seems always to have felt that the first part of the new scheme must be a pars destruens, a destructive criticism of all other methods. Opposition was to be expected, not only from previous philosophies but especially from the human mind itself. In the first place, natural antagonism must be looked for from the two opposed sects, the one of whom, in despair of knowledge, maintained that all science was impossible; while the other, resting on authority and on the learning that had been handed down from the Greeks, declared that science was already completely known and consequently devoted their energies to methodizing and elaborating it. Secondly, within the domain of science itself, properly so-called, there were two "kind of rovers" who must be dismissed. The first where the speculative or logical philosophers, who construe the universe ex anologia hominis and not ex analogia mundi -- or, in terms of their knowledge of man rather than of nature -- who fashion nature according to preconceived ideas and who employ in their investigations syllogism and abstract reasoning. The second class, equally offensive, consisted of those who practised blind experience, which is mere groping in the dark (vaga experientia mera palpatio est), who occasionally hit upon good works or inventions, which like Atalanta's apples, distracted them from further steady and gradual progress toward universal truth. In place of these struggling efforts of the unassisted human mind, a graduated system of helps was to be supplied by the use of which the mind, when placed on the right road, would proceed with unerring and mechanical certainty to the invention of new arts and sciences. Such were the peculiar functions of the new method, though it had not yet definitely appeared what that method was, or to what objects it could be applied.
Posted by badijet@gmail.com at 4:41 AM