I was a casual club chess player in the 1970's and 1980's. It mattered to me that computers were challenging humans, and I wanted to beat The Machine. I remember when Mohawk College had an open house with access to a mini-computer that played chess, I very much wanted to beat it. I had to line up, but it did win. Once it had bested me, I considered chess to be "solved," and I went on to other challenges. I am grateful to have lived in a time where computers went on to the much more notable heights of beating the best human chess player ever, Garry Kasparov, in the late 1990's. In this book by him, Deep Thinking, he recalls teaming up with a machine and checking the work of chess masters who went before him. Backed up by the powerful chess programs available now, he tells of the mistakes that were routinely made in the analysis, without the help of computers, found in chess books and magazines in the past. You might think that the analysis made in the calm of one's study with no time limits would have made it easier to grasp the best move than players working under time pressure. Not so.

"Hindsight is 20/20, is it not? But one of my first discoveries was that when it comes to chess analysis in the pre-computer age, hindsight was badly in need of bifocals. Paradoxically, when other top players wrote about games in magazines and newspaper columns they often made more mistakes in their commentary than the players had made at the board. Even when the players themselves published analyses of their own games they were often less accurate than when they were playing the game. Strong moves were called errors, weak moves were praised. It was not only a few cases of journalists who were lousy players failing to comprehend the genius of the champions, or everyone missing a spectacular move that I could easily find with the help of an engine, although that did happen regularly. The biggest problem was that even the players would fall into the trap of seeing each game of chess as a story, a coherent narrative with a beginning and a middle and a finish, with a few twists and turns along the way." (Deep Thinking, pp. 137-138) 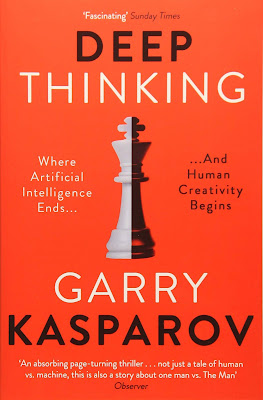 How often is such a flawless retrospective accounting possible in any field of human knowledge? How natural it is for us to make up stories about what we only partially grasp. It may well be that someday the works of philosophers, policy makers and lawmakers will be just as easily and clearly refuted by some similar partnership between human and machine, I don't know, but the observations of Kasparov are very illuminating as a sort of autopsy of human attainment in this realm of intellectual endeavour. How foolish we are to put entire reliance on human expertise, which is oh, so fallible!

At one point in the book, Kasparov tells an anecdote about Bobby Fischer, the American chess prodigy of the 1960's and 1970's. "An eager fan fan pressed him after a difficult win. "Nice game, Bobby!" Fischer answered, "How would you know?" (Deep Thinking, p. 92) A bit rude, but that is just it, we can only understand what is on our own level, and anything above that is a mystery, a frightening mystery. Kasparov, in partnership with modern chess algorithms, is reflective about the lessons that can and cannot be derived from past ignorance and errors for the future.

"I took two lessons away from this discovery. The first is that we often do our best thinking under pressure. Our senses are heightened and our intuition is activated in a way that is unique to stress and competition. I would still rather have fifteen minutes on my clock than fifteen seconds to make a critical move, but the fact remains that our minds can perform remarkable feats under duress. We often do not realize how powerful our intuitive abilities are until we have no choice but to rely on them.

"The second lesson was that everyone loves a good story, even if it flies in the face of objective analysis. We love it when the most annoying character in the movie finally gets what he deserves. We root for underdogs, cringe at a hero's downfall, and sympathize with the unlucky victim of the Fates. All these tropes are in play in a chess game, just as they are in an election or the rise and fall of a business, and they feed the powerful cognitive fallacy of seeking a narrative where often none exists."

"Computer analysis exploded this lazy tradition of analyzing chess games as if they were fairy tales. Engines don't care about story. They expose the reality that the only story in a chess game is each individual move, weak or strong. This isn't nearly as fun or interesting as the narrative method, but it's the truth, and not just in chess. The human need to understand things as a story instead of as a series of discrete events can lead to many flawed conclusions. We are easily drawn away from the data by a nice anecdote that fits our preconceived notions or that fulfills one of the popular tropes. This is how urban legends propagate so efficiently; the best ones tell us something we really want to believe is true. I'm certainly not immune to this tendency myself, and it's impossible to overcome all our intellectual biases. But becoming aware of them is a good first step, and one of the many benefits of human-machine collaboration is helping us overcome lazy cognitive habits."
(Deep Thinking, pp. 138-139)
Posted by badijet@gmail.com at 10:38 AM