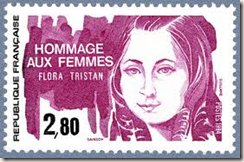 Living conditions of workers in the 1840's were degraded to the point of desperation. Sadly, ignorance and poverty were worsened by open strife among themselves. Workers' guilds in Flora Tristan's time were fraternal groups whose interests were seen as restricted to a given trade. The idea of solidarity among all workers was a foreign one. Guilds were plagued by bitter rivalries among trades; it was not unknown for fights to escalate to rioting in the street. They sponsored graduating apprentices on a cross country junket called a "French tour." Unfortunately, this involved more carousing than professional development.

The year after completing her "Worker's Union", Flora Tristan followed the example of the workers she wanted to help by starting her own "French tour," a speaking tour promoting broader solidarity. "Worker's Union" was her suggested plan of action for organizing guilds and other workers groups across the country. In the spring of 1844 she officially started her Tour de France, leaving Paris on the 12th of April. She took her mission very seriously, fighting ill health, giving public addresses in each town, pleading with the proletariat to build worker's palaces.

Her diary of this tour recorded details of working class life that no other writer noticed, making it a valuable document for historians today. On her first stop, Auterre, she wrote in her diary that "I felt in me something like a divine grace enveloping, magnetizing, and transporting me into another life." (Le Tour, P. 38, cited in Workers' Union, Translator's Introduction, xv) After six months of travel her illness worsened and she had to stop. Bedridden, she died in a hotel room soon afterwards.

Flora Tristan held that workers can advance their own lot through effort and study. Nobody else was going to do that for them. As a fervent Christian, she believed that faith, knowledge and love are the true liberators; in Christ's words, "the truth shall set you free." She did not believe that conflict between classes was needed, much less inevitable. The mere fact that they were in the majority was sufficient for ultimate victory. As they educate themselves and exercise their rights, the representatives of her proposed Worker's Union could enter government. Soon, they would gain the same amount of influence in government as had the bourgeoisie. The democratic process would then kick in, workers would dominate elections and their interests would prevail on their own.

Nonetheless, she was not naive. With great prescience Flora Tristan anticipated the chief objection that would be raised against unity among workers,

"This demand, no matter how just and legal, will be considered an attack on property per se (land, houses and capital). And labor organization will be considered an attack on private enterprise. And, since those who lead the governmental machine are land and capital owners, it is obvious they will never agree to grant such rights to the working class." (Tristan, Flora, The Worker's Union, Translated by Beverly Livingston, University of Illinois Press, Urbana, 1983, p. 55) 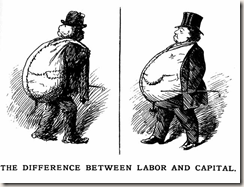 After Flora Tristan's death in 1844, extremism and radicalism took over. Revolt, violence and reaction made an ever more volatile mix. As conditions for workers worsened a series of revolutions broke out across Europe, lasting until about 1847. All failed. Nonetheless, the radical model of socialism took over. After a decade of Louis Napoleon's dictatorial regime, a spontaneous bloody uprising in Paris known as the Paris Commune broke out as soon as his restraints toppled. Idealistic socialism gave way to communists fomenting open rebellion. In 1848 Karl Marx and Friedrich Engels wrote their famous Communist Manifesto. Inspired by Flora Tristan's example of martyrdom on behalf of workers, they agreed with her that the poverty-stricken, exploited workers of the world had to take their fate into their own hands.

The difference was that Marx and Engels prescribed war instead of construction. A recent reader of the Manifesto pointed out that it is difficult to read this stirring tract without wanting to go out and shoot a businessman. Whereas Flora Tristan in Worker's Union addressed everyone involved, businessmen, politicians, women and men, as well as workers, the Manifesto is addressed to the victims of exploitation alone and ends with the famous admonition, "Workers of the world unite, the only thing you have to lose are your chains." Flora Tristan would have pointed out that this is, at the very least, a lie. The right to life is crucial. Workers can easily lose their lives, their families, their homes and their wages, and they do every day. In rebellions they invariably suffered the most. Even if they really had nothing to lose, perpetual class struggle would doom everybody to the loss of a clean, peaceful world and a harmonious future.

As atheists, Marx and Engels did not agree with Tristan that truth alone is enough to liberate workers. They firmly believed that conflict not only cannot be avoided, but also that it should not be avoided. The misery of most of mankind is its fate and our only choice is who will be the miserable class. Their ideas eventually led to the Soviet Union, a spectacularly failed experiment in forced equality that lasted most of the 20th Century. 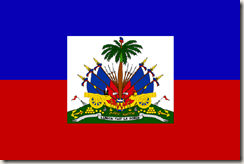 The Chains of Haiti

The historical model that Marx and Engels called to mind when they spoke of "chains," was a singular series of events that took place about fifty years earlier in the French colony of Saint-Domingue. There, for the first time since Moses, a successful slave revolt took place. After a long series of bloody slave uprisings, the slaves really did lose their chains. The victorious former slaves named the French side of the island of Hispaniola "Haiti." This event, where slaves won out, sent a chill down the back of the ownership class, especially in France and America. In spite of the rhetoric of the French Revolution about freedom and brotherhood, French gunboats were sent to Haiti, but even that failed to put down the rebels.

The model of self-liberating slaves that Marx and Engels chose was an unfortunate one. With only two known exceptions, all slave revolts in history were crushed. Moses' slave revolt, we should recall, was aided by divine miracles. Even then it took a full generation for the Israelites to see the promised land. The modern abolition of official slavery came from top-down legislation by the British parliament, which banned slavery throughout its Empire. In the United States the Emancipation Declaration was also top down, and made only after slavers had dragged the country into civil war.

For better or worse, the bottom-up triumph of the Haitian slaves was unique, a Pyrrhic victory, and remains so today. It provoked a united reaction by the entire ownership class, which then as now, is highly class conscious and refuses to respect national borders. It pushed the French government to incur on Haiti a huge reparation payment to compensate for "stolen property," that is, their human chattel. Haiti had indeed been a plum target, by far the wealthiest colony in the Americas. The sum they arrived at for reparations padded their budget for over a century. Several times during the 19th Century the leaders in Haiti tried to default on the unjust debt. Other western powers, including Canada, America and England, supported France in recouping their "compensation" for lost slaves.

After several attempted defaults, Haiti finally paid off the debt in the late Twentieth Century, leaving its infrastructure devastated. To this day, Haiti remains a pariah state, anathema to capital, isolated, chaotic and, though technically independent, it is still enslaved to drugs, debt and corruption. From the richest it sank to the poorest nation in the Americas, one of the poorest on the planet. In spite of all our political correctness today, and even after a devastating earthquake levelled Port au Prince in 2010, France still refused to recognize pleas by activists to return the mulcted money to Haiti.

A slave rebellion was hardly an auspicious model for the workers to adopt! The Communist Manifesto plunked the worker's movement right into a no-man's-land between owners of capital and government. The more militant workers got the more fearful owners became. It is no longer possible to crucify revolting slaves alongside public highways as a grisly warning as was done in Roman times after Spartacus's revolt, but the elected leader of Haiti, Jean-Bertrand Aristide, was still quietly exiled to South Africa, to mention only one instance. Owners do anything to protect against threatened loss of their wealth, legitimate or otherwise. Such is the dominance of the male element and the unpopularity of religion today that the name "Karl Marx" continues to remembered by every educated person today, while the name "Flora Tristan" remains buried in obscurity.

Next time, let us talk about what for Flora Tristan was the real enemy we should be fighting.

Posted by badijet@gmail.com at 8:43 PM