DREAM Kicks Off A Season of Activism

On October 14th at the Minga Restaurant, the DREAM youth group started its raising awareness series with the Michael Moore film, “Where to Invade Next,” followed by discussion led by a member of the DREAM team, in this case, Sarah Taylor (age 17). Sarah spoke of the DREAM goal of setting an example of social concern for other youth, and of an idea in the film that all it takes to tear down a wall is an idea – Moore's wall was the Berlin Wall, whose fall he and a friend witnessed. In the movie, Moore describes how he travelled Europe, searching for good ideas and policies to bring back home to the United States. This was because he has been criticized in his filmography for loudly crying about problems and ignoring their solutions. I asked Silvie Taylor (age 22) what she thought of the film. She said,

"In the movie, I liked that the kids (in Finland) got a better education through less homework, less school and more creative time. There was also an interview with the world's first female president (Iceland, Vigdís Finnbogadóttir, who was elected in August of 1980), which set the bar for more female presidents. And it was sad to see how cruel the U.S. prison guards were to Black prisoners, especially compared to the Norwegian prison system that focused on rehabilitation, not revenge."

The movie also showed Moore's visit to Portugal, where drug use has been legalized. Instead of chaos, this policy, combined with treatment and reintegrating of addicts into society, has had great success. For more information on this non-isolationist approach to eliminating drug abuse, see the book, "Chasing the Scream: The First and Last Days of the War on Drugs, by Johann Hari, at http://chasingthescream.com/

Moore also interviews police officers in Portugal, who ask him for a chance to send a message to law enforcement officers in America about the death penalty: "Killing people in the name of the law is an affront to human dignity," they declare.

After the movie, DREAM organizer Reza Kazemi spoke about the advantages of watching a documentary like this together. The magic of collective awareness shared together is different from what it would be if we watched the same film at home. Like Moore's film, the present emphasis of DREAM is positive. They wrote: "This year’s DREAM raising Awareness series looks at solutions and possibilities for creating positive change. Rather than only looking at a problem, the focus is to look at the solutions community can offer."

The next in the series will take place on on November 18th, in support of the Dunnville Farmers’ Market. The movie will be Michael Pollan's documentary, “In Defense of Food,” meant to debunk the daily media barrage of conflicting claims about nutrition. DREAM is also sponsoring an application of the lessons of eating food, rather than factory produced junk food, on Feb. 24th, with a “A Culinary Night that Heals”.  Grade 8 students of Dunnville will cook up gourmet food that is healing, both for our bodies and the planet. 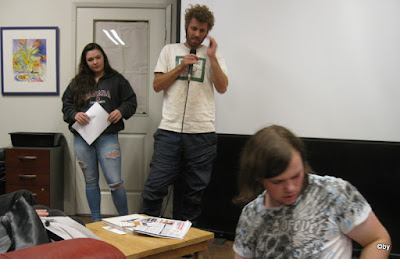 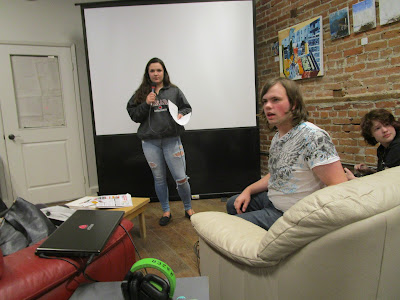 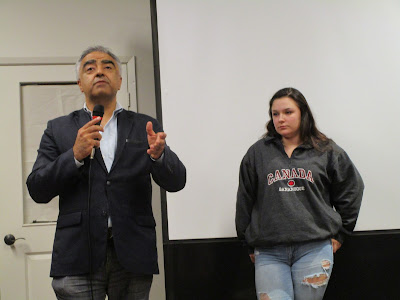 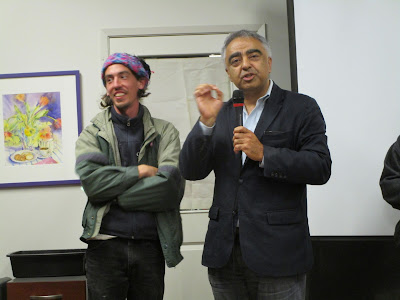 Posted by badijet@gmail.com at 12:53 PM No comments:

Which came first, the chicken or the egg? I was reminded of that problem when I visited D.D. Diner and Motel. Is it that people who are very good at what they do also create a relaxed, friendly atmosphere? Or do happy, friendly people create a workplace where they are not afraid to experiment and try new things, and that scientific approach helps them improve? Whatever the reason, I am talking about my visit to that restaurant you see your left as you drive out of town towards Welland, on Highway #3.

The new owners, Francine and Gus Doslea seem to be on to such a good thing. After they purchased the establishment last September, they followed the tried and true rule for success in business, hire talented people, stand back and let them work. In this case, they hired weekend cook Reg Szikora and weekday cook Wendy Gloyd. Francine is also a cook, and her husband Gus is a server.

I asked what they like about working there. Francine likes being able to work at home while taking care of her little great-niece Brynn. The cook Reg has broad experience, having worked many years for the Canadian military, in greenhouses, a pizza restaurant and, for the last twenty years, this very restaurant, through its succession of owners. "I can tell you this," he announces, "Of all the places I've ever worked, this is the best, under the present owners."

I talked with Francine about the "hotel" part of D.D. Diner and Hotel. As a trained furniture designer, she has great plans for the décor in the rooms. Renovations are ongoing, refurnishing each room, and the plan is to include a kitchenette in each room. Outside, by the parking lot, she will create a rest area, picnic tables surrounded by a green, park-like setting. When everything is complete they plan to stage a grand opening, but that will not be for a while.

For now, the big story is that we have a new restaurant in town. Last year, as Internet restaurant reviews attest, the truck stop was frankly becoming run down and neglected. When they took over, Francine set out to move the style of the eatery from a truck stop to more of a fine dining experience – although, she hastens to add, "We pay close attention to good value, keeping prices down as much as possible. For example, when we found a better price for coffee last year, we passed the savings on to the customer.

As much as possible the cooks buy fresh, often with locally sourced produce from the Dunnville Farmer's Market, including LauRay Farms. Every weekend, Reg makes up a batch of fresh soup, with fresh noodles made from scratch.

Every soup is unique, and he does not repeat himself. Needless to say, that soup surprise has become one of the most popular dishes on the D.D. Diner menu. Also popular is their all-day breakfast. When I asked what is the most frequently ordered dish, Francine said that would probably be the toasted Western sandwich, or the clubhouse sandwich.

Myself, I ordered a fish and chips take-out, and I can say first hand, and my family agrees with me, that it was very fresh and tasty. I can hardly wait to find out what soup they will be cooking up next weekend. 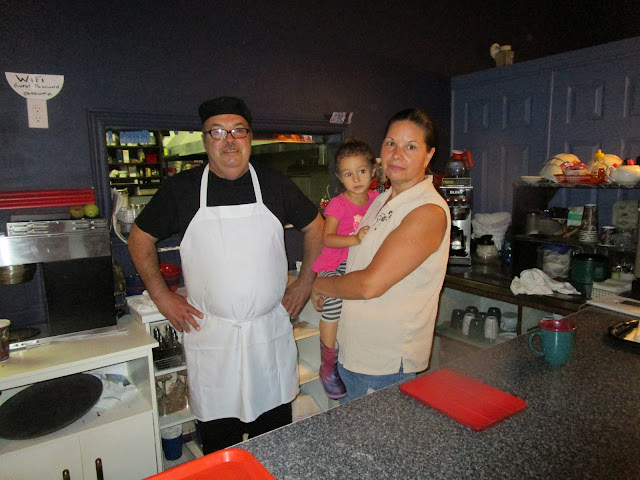 Reg Szikora, Brynn and Francine Doslea
at the counter of D.D. Diner 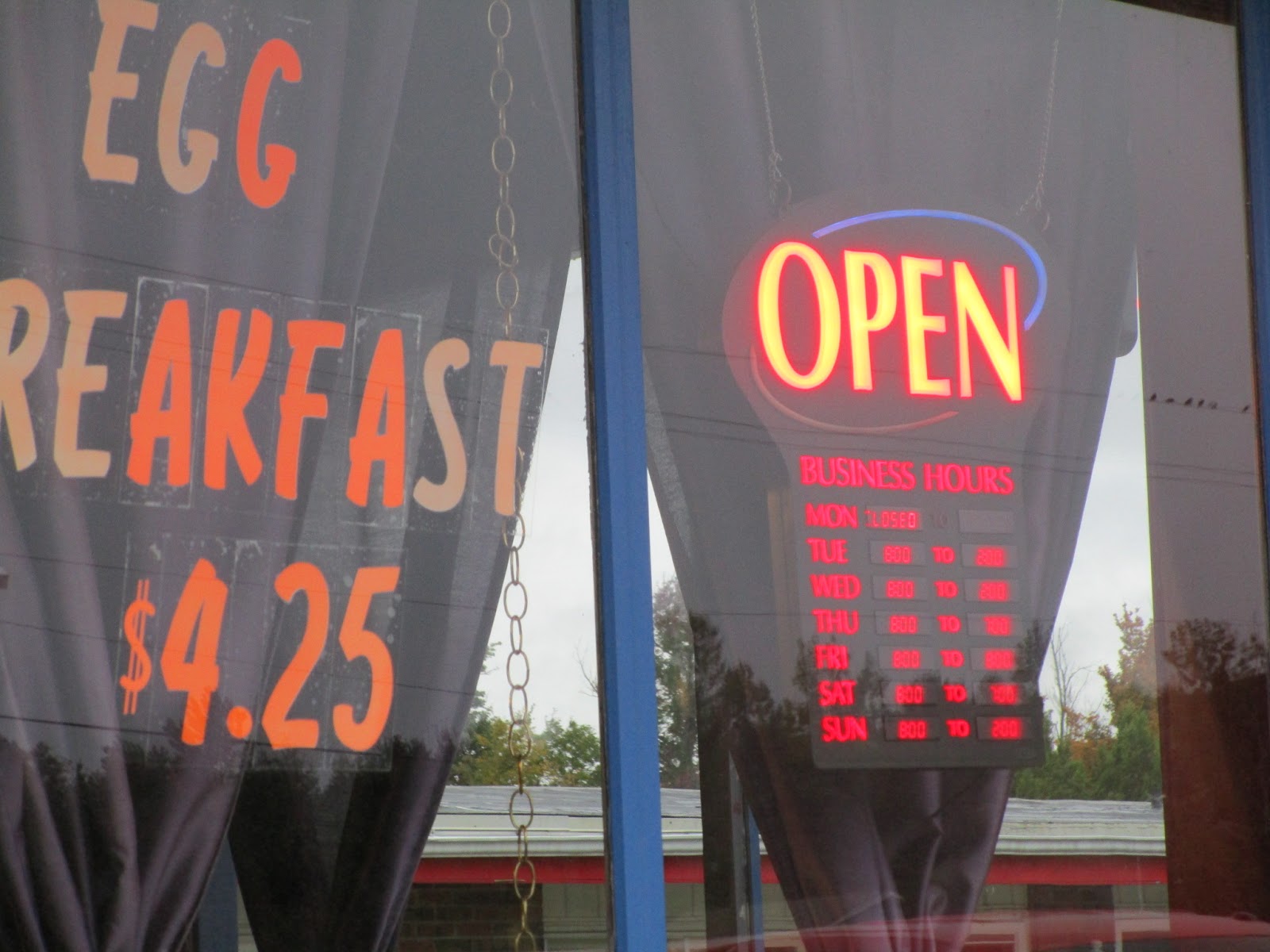 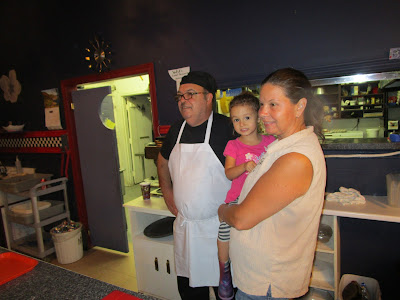 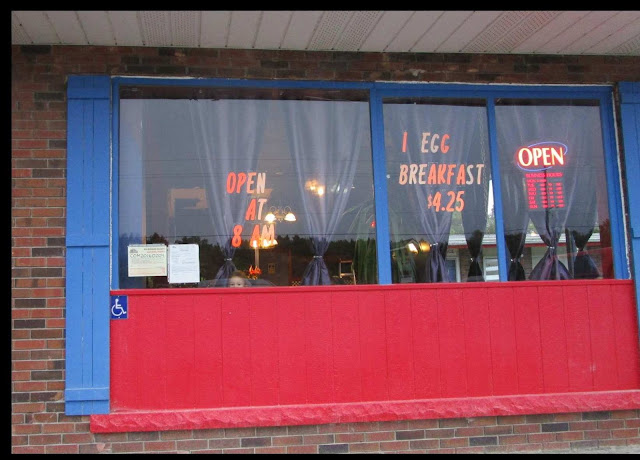 Brynn peeks out the front window of D.D. Diner 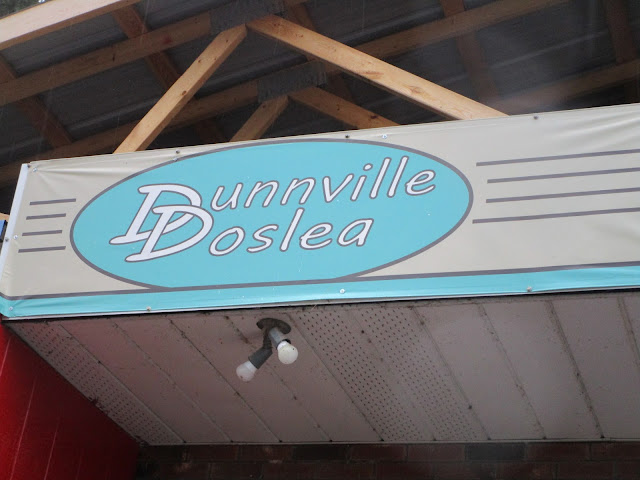 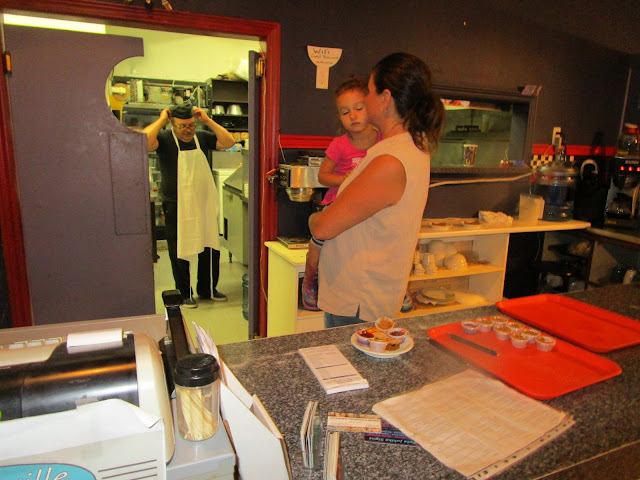 Posted by badijet@gmail.com at 7:55 AM No comments:


The nature of citizenship has changed radically over the past two centuries in Ontario. Now, we are expected to pay our taxes, vote every few years, and not complain too loudly about how onerous our civic duty is. Before though, every homeowner was expected to slog it out on work crews building and repairing local roads, and, in the event of a fire anywhere and at any time in the whole area, to join the bucket brigade and risk life and limb dousing fires.

On the 28th of September, the Dunnville District Heritage Association's researcher Judy gave an illustrated lecture called "Fire! 1902: A Hot Year in Dunnville," discussing the development of a professional firefighting force in Dunnville around the turn of the 20th Century, focusing particularly on 1902, a year when the town was struck by no fewer than seventeen major fires. Although the results were devastating in terms of property loss, they did accelerate the transition to the professionally trained (though still largely volunteer), high tech fire department that we enjoy today. Dunnville firefighters were untrained conscripts, every male citizen, until well past the turn of the Twentieth Century, although from the beginning their equipment was purchased and owned by the town; even in the 19th Century Dunnville was well ahead of other towns in the region, such as Welland and Hagersville, in adopting the latest firefighting technology.

Still, until 1892, fires were mostly fought using the ancient measure of the bucket brigade. Every able-bodied man in town was expected to be on call 24 hours a day to help put out conflagrations. It was BYOB, bring your own bucket, too. Houses that were too far away from the river were out of luck, unless a horse drawn tanker wagon was available to be summoned quickly enough. The presenter showed vintage photographs of Dunnville, pointing out a characteristic construction of the time, a tall tower in which fire fighters hung their fire hoses to dry. Hoses at the time had to be carefully dried out, or the water would destroy the materials out of which they were made.

In 1892 underground water pipes were installed in order to extend the area where houses were protected from fire. Firefighters were now able to shoot a stream of water 120 feet into the air, affording protection even to three storey buildings. But there were still problems. Water hydrants frequently froze in winter, leaving entire neighbourhoods vulnerable to destruction by fire. Someone on the town council suggested that they be covered in manure, but the firefighters balked. In turn, they requested that town councillors be the ones to connect hoses to the hydrant in the event of a fire during winter. This proved persuasive. Instead, boxes of straw were built to insulate the new hydrants; this made connecting hoses in winter a more pleasant prospect.

Dunnville had to rebuild its train station in 1903 and in 1938. In 1978 a combined fire hall, courthouse and police station burned down. Mills were particularly vulnerable to fires around this time. Flour dust filled the air, making a highly flammable mix. Often, vagrants would break into the mills built next to the river in order to find a place to sleep. A cigarette or cooking fire would then set the whole place ablaze. Often, the first sign that a mill was going to ignite was the sight of large packs of panicky rats rushing in a frenzied swim into the Grand River.

The DDHS gave this talk at an appropriate time for me. Early this summer the house across the street from us burned down, and the hulk that remained was only just demolished. I pointed the ruined site out to a visitor from Holland. She wondered why we keep building houses out of wood here in North America. Why not build them out of stone, as they do in the old country? The DDHS speaker brought this point up, mentioning that for one thing, wood is comparatively cheap here. After hearing the story of our year of fires, I wonder if it might not be a good idea to consider the entire life of a building before we decide whether to make it out of flammable materials.


Upcoming DDHS meetings this fall will be Pauline Johnson: A Poetess Between Two Worlds, on Wednesday, October 26, 2016, and World War 1: The Boys Come Home, on Wednesday, November 23, 2016. For more details, go to their website at: http://www.dunnvilleheritage.org/services Held at 7 PM in the auditorium of Grandview Lodge, 657 Lock Street West, Dunnville, ON. 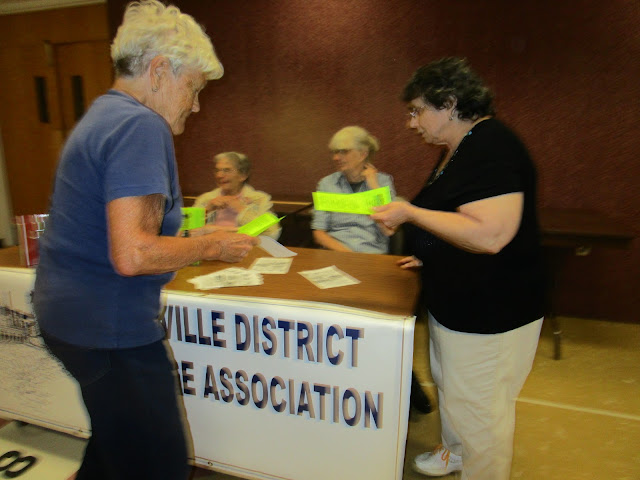 April Cormaci and other volunteers at the DDHA booth 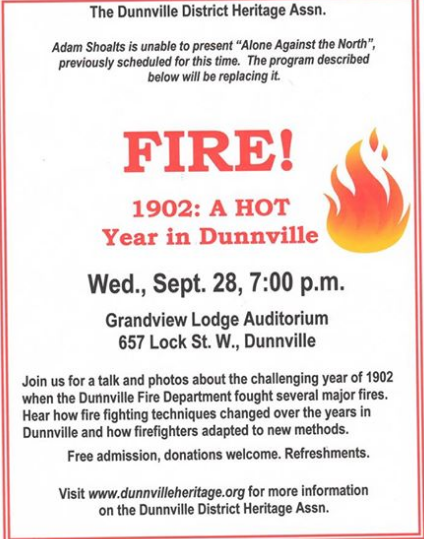 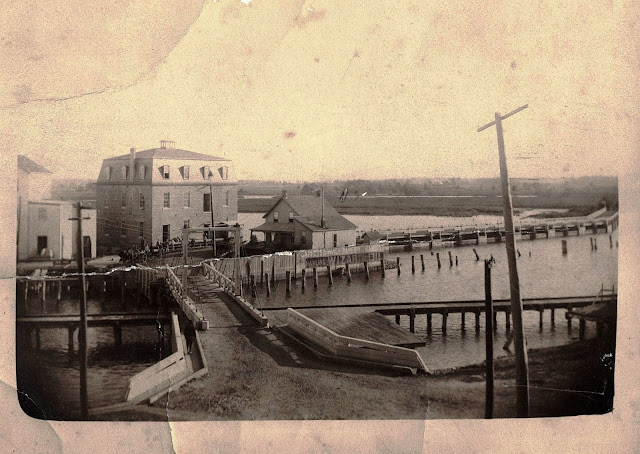 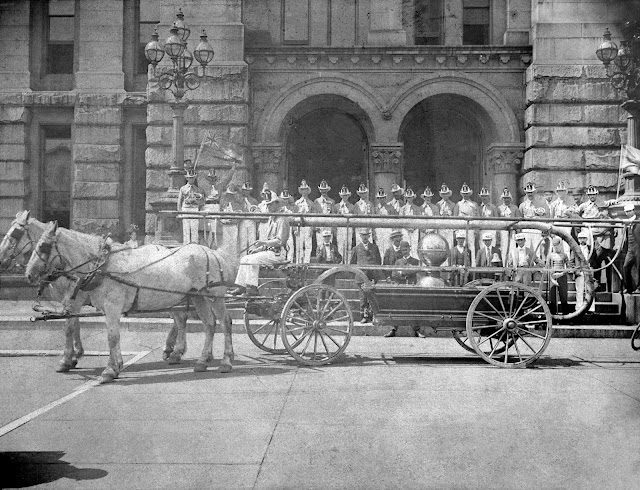 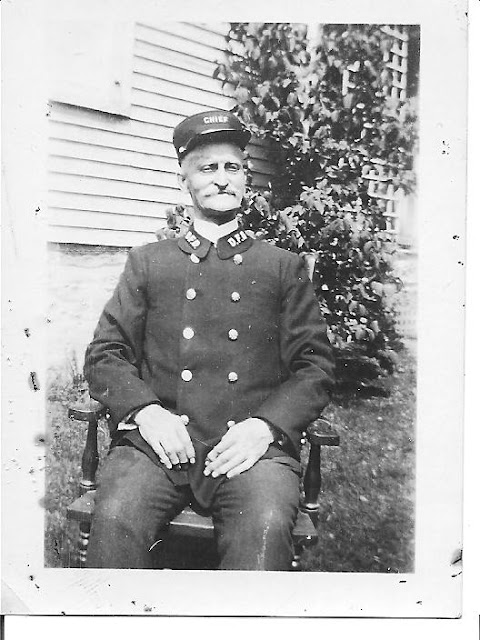 Posted by badijet@gmail.com at 7:55 AM No comments: