by John Taylor for the Dunnville Free Press, submitted 29 November, 2015

On November 27th the DREAM youth mentorship program presented the feature documentary "The Human Experiment," followed by a discussion of the issues raised. The event was sponsored by Hauser's Pharmacy.

This movie was produced and narrated by Sean Penn. It exposes yet another putrid symptom of the corruption besetting the American legislative system. In effect, the chemical industry has a license to kill and uses the people as laboratory rats in a mad rush for profit. They are free to introduce a flood of unregulated, untested chemicals born with the same rights humans have to be considered innocent until proven guilty. Thousands of concoctions are not only released into the environment but directly into our bodies by eating, drinking and smearing them on our skin. The film follows around activists against such irresponsible laws in an exhausting, heroic, Sisyphean attempt to limit some of these chemicals. Even some Californian teenage girls, when they learned what is in their cosmetics, became lobbyists for rules and transparency about what is in them. 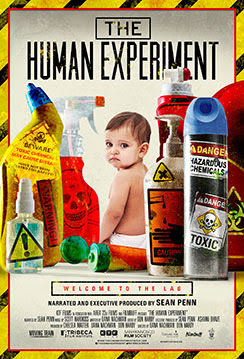 Baby shampoo, for example, one might think would be the safest substance on sale, since we rub it into the scalps of our most precious and vulnerable citizens. But no, for unexplained reasons the folks at Johnson and Johnson came up with the "innovation" of pumping baby shampoo up with formaldehyde, a chemical whose toxicity is as unambiguous and tried and true as you could imagine. When pressured to take out the poison, they did so -- everywhere except in the US. There, legislators can be corrupted at a bargain price. The film shows the shock on Americans' faces when they learn that their nation has become a dumping ground for the world's most dangerous products, from plastics to literally millions of other monstrosities.

The film tells the heart wrenching story of one activist fighting for regulation who at first cannot conceive, probably due to chemical exposure, and then must watch her baby sicken and die from exposure to plastics in the life-support equipment that kept him alive. One green advocate compares their work to a game of Whac-A-Mole. Bash down one poison and another immediately pops up its head.

Ironically, the chemical industry knows that, compared to Europe, even compared to regulated branches of the American economy, it is shooting itself in the foot. For example, we can get into a car with full assurance that its design will not kill us, since its manufacture is subject to judicious safety regulations. But women who buy cosmetics or shampoo or clean their homes with commercial cleaners, or men who work with plastics like PVC, have no such peace of mind -- or rather they would not if they knew what was going on. They show in excruciating detail the devastation of cancer, infertility and infant mortality caused a toxic brew of chemicals in products we trust, buy and use every day.

But these executives, like addicts and criminals, cannot help themselves. Bullying the American government into having it their way is just too easy. Their exemplars are the tobacco industry, who over several decades worked out a scam called the "four dog" strategy. Start with "dog one," denial. My dog cannot have bitten you because it does not bite. Dog two is diversion, it may bite, but there is no proof that my dog was the one who bit you. Dog three is denial of harm. It may have bitten you, but you were not badly hurt. The fourth dog shifts responsibility to the victim. My dog may have mauled you, but I had nothing to do with it; you probably provoked him. You knew what you were doing when you bought something with chemicals in it, so you have to man up and take the consequences.

The movie provoked a spirited discussion afterwards. One audience member talked about peanut allergies, unknown in his youth but now making peanuts a forbidden substance in schools. Unknown chemicals are allowed in, but not peanuts! Another pointed out that the poor used to eat nothing but peanuts, hence the expression "the peanut gallery," meaning the raucous members of the cheap seats in a theatre. Now the poor are steered away from natural food into chemical laden treats sold by irresponsible corporations. Another agreed, "These oil executives and other one-percenters are nothing but well heeled serial killers." Another held that the neo-cons have a similar scam, they dupe the 99 percent into lobbying for them by pushing for lower taxes (who wants more taxes?) and less regulation, as if that were a good thing, a blow for freedom. One person mentioned the LEAP manifesto promoted by Policy Alternatives.

After the meeting, DREAM organizer Barbara Kazemi stated that their goal over the past decade has been first to raise awareness and, this year, to promote individual action, especially among young people. She encouraged all to attend upcoming climate change initiatives and demonstrations in Hamilton and Toronto. "We are trying to get a speaker from LEAP for an upcoming DREAM meeting. Maybe even Naomi Klein." She said that anybody who wants to help can purchase a ticket for the DREAM series, volunteer to help or act as a community sponsor. They can find out by visiting The Minga at 146 Queen St., or calling 289-738-1198. Their site is:www.dreamfwb.com 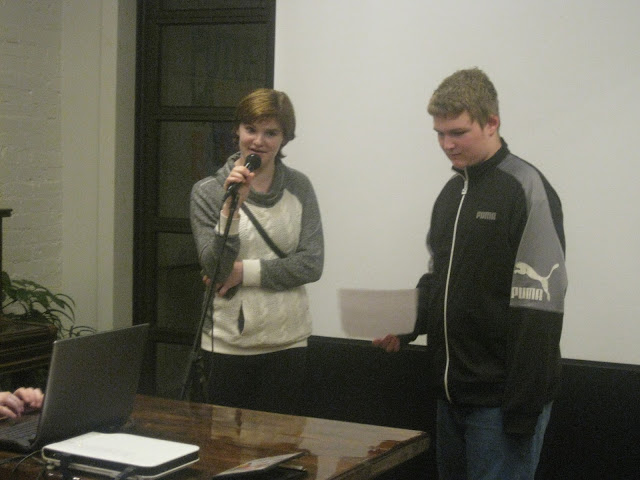 DREAM student members Kennedy House and Braden act as masters of ceremony for the film presentation and the discussion afterwards. 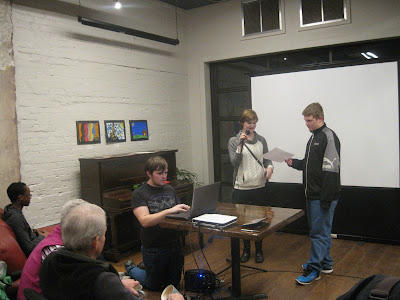 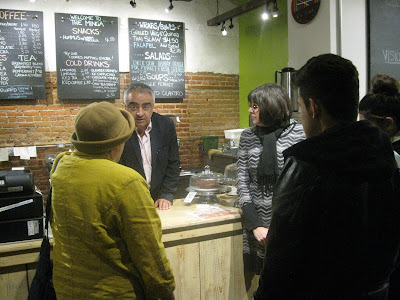 Drs. Reza and Barbara Kazemi preparing for the event. 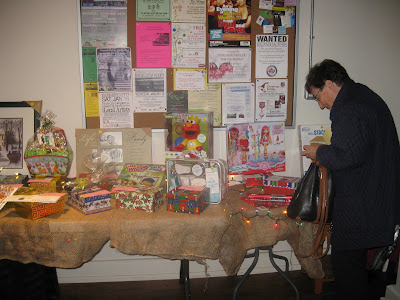 The Penny Sale at the Minga was ongoing. Proceeds go to the DREAM Program. 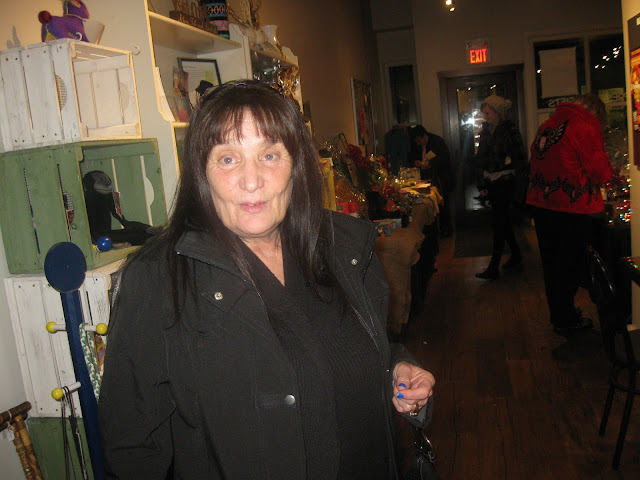 Regular attendee Candace Sterne stated that the biggest obstacle to change for these causes is that we tend to preach to the converted and there is a lack of participation on the part of the average person. Her favourite part of the evening was the conversation afterwards, especially the question and answer session. She often feels angry at the issues brought up, but she also feels empowered to see others engaged in their solution. (photo taken with permission)

Posted by badijet@gmail.com at 9:28 AM No comments:

Review of "The 39 Steps," by the Dunnville Community Theatre

Presented by the Dunnville Community Theatre,

Theatre Review by John Taylor,
for the Dunnville Free Press


The Dunnville Community Theatre opened this season in its new, brighter and more spacious location at the Dunnville District Anglers and Hunters Conservation Clubhouse with a performance of the play, "The 39 Steps." This play is a reworking of the story originally written by John Buchan (Scottish novelist and one time Governor General of Canada) during the First World War. The novel was adapted for the cinema in 1935 by Alfred Hitchcock, among the first of the genre of spy-thriller blockbuster. It is the story of an ordinary man, a Canadian no less, is caught up in a sinister plot to smuggle a secret out of the country. The bad guy, just as in the James Bond series, is suave and sophisticated, an evil mastermind determined to smuggle out of England plans for a revolutionary, completely silent aircraft motor. In the play, however, all the craft and conventions of the stage are applied to turn "The 39 Steps" into a farce.

The result is a mystery, truly magical. I could not believe my eyes. Here we were laughing uproariously at a story that -- I could have sworn --was decidedly not funny. It was a total change, as a Monty Python film puts it, "And Now For Something Completely Different." I was so intrigued that I went right home and watched the 1935 Hitchcock film right through, and was astonished to find that much, if not most, of the action and dialogue were left unchanged in this theatrical version. How did they make a thriller into a comedy that looks like it was born and raised for laughs? Now I feel like going back to watch the play again and again in hopes that I will somehow catch what its secret is.

Credit for this amazing piece of legerdemain no doubt should go to the "adapter" Patrick Barlow, but for bringing it to Dunnville and putting it on stage here, we have director Nancy Erskine to thank. Without actually walking onto the stage, her spirit pervaded the evening. The leading man, Jordan Heron, carries his role well, with understated distinction. Kathryn Stengel makes a svelte and gracious romantic lead, but more than that, she make three leading ladies, complete with three different accents. In the role of "clown 2" Diane Morris offers a comic charm that anchors the shenanigans surrounding her, through all of the many roles she plays. The youth element is represented by Gordan Huffman, Clown 1, who delivers a poised performance with a natural sense of timing that promises greater things soon to come.


It is not too late to catch this unique experience. Two performances are upcoming next weekend, including the well known "dinner theatre," where you taste a chef's interpretation of the themes of the evening's play before enjoying the play itself. 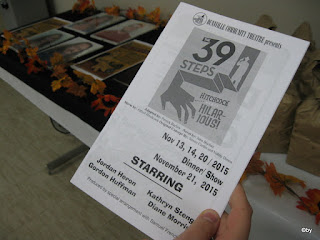 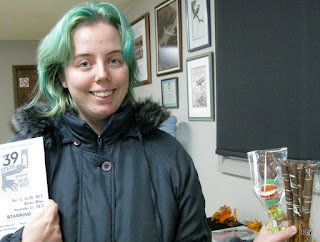 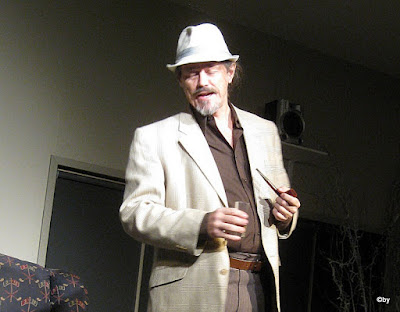 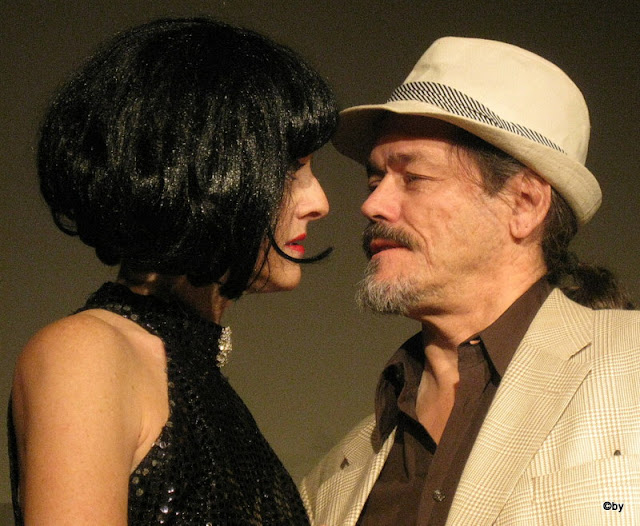 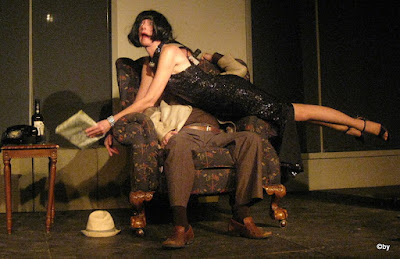 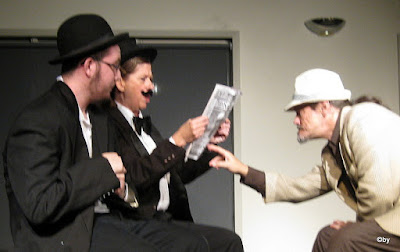 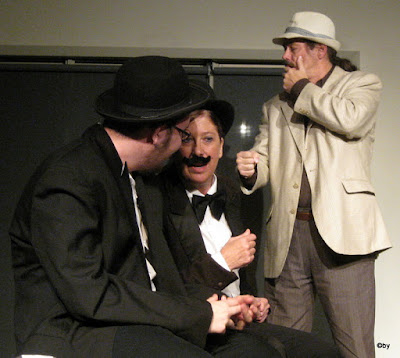 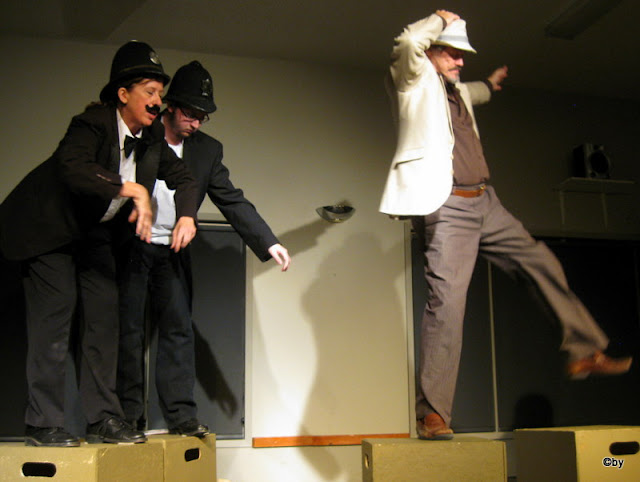 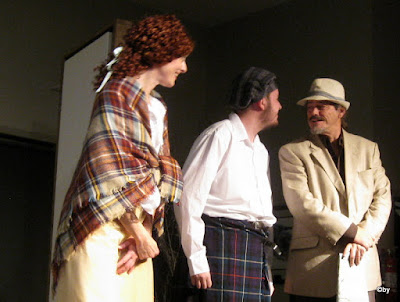 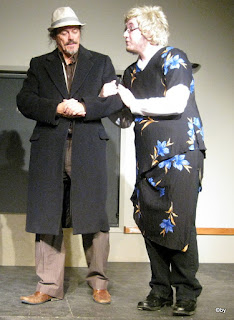 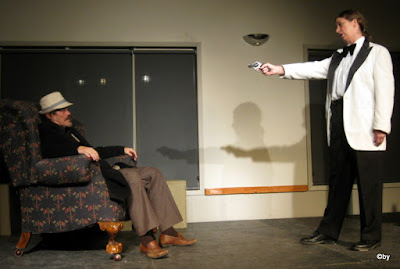 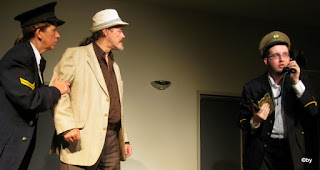 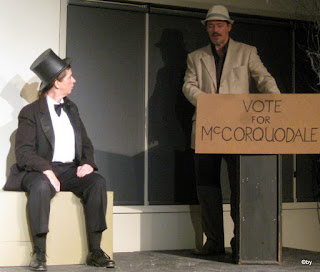 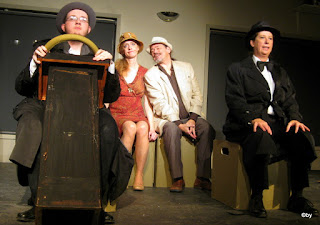 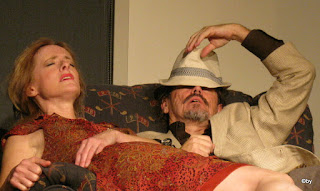 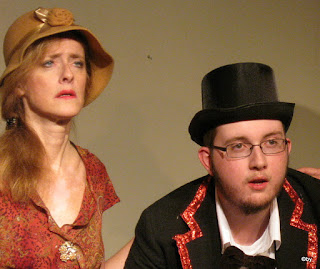 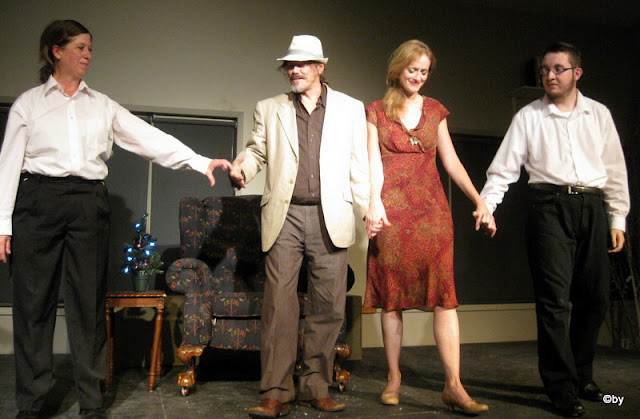 Posted by badijet@gmail.com at 2:11 PM 3 comments: