Why did Ali Muhammad of Shiraz take on the title, "The Bab"? I will attempt an answer and I would ask that you punch any holes in it that you can find. 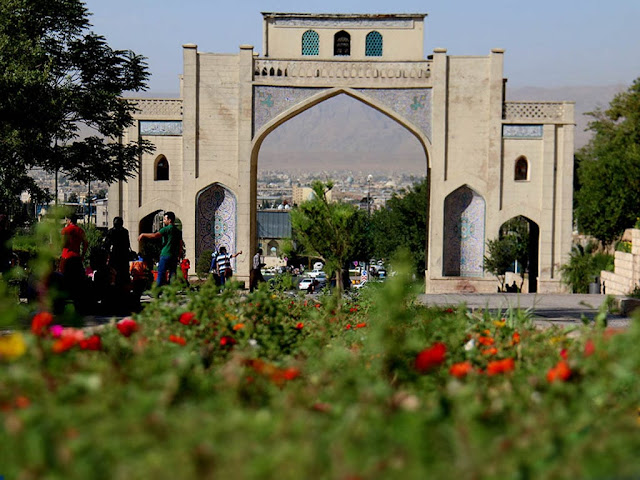 The short answer is that in Shiih Islam the term "Bab" or gate was used to refer to the hidden Imam, who had eschatological significance. But surely there is a reason for that, why call the promised one the Gate? Here is my suggestion.
In Genesis 28:10–17 it tells of how Jacob went to Haran where he sleeps on a stone pillow. Then he dreams of a ladder or stairway with angels of God going up and down from heaven. God promises him several promises in a thing we call the covenant. Jacob makes a pillar out of the pillow and calls the place Bethel, or house of God. Doing so, he is filled with fear, and declares, ""How full of awe is this place! this is none other than the house of God, and this is the gate of heaven."
Later, the descendant of Jacob, Jesus, ties the ladder to ethics, specifically the Golden Rule, in Matt 7:12-13, ESV,
"So whatever you wish that others would do to you, do also to them, for this is the Law and the Prophets. Enter by the narrow gate. For the gate is wide and the way is easy that leads to destruction, and those who enter by it are many."
The Golden Rule in some form is in every religious tradition, but only a handful of them phrase it positively. That is, most say not to do unto others what you don't like. This says to do more, actually to do unto others what you like, and that is what religion is all about, "the law and the prophets." The use of "gate" is to identify the Golden Rule with a narrow passage, a difficult transition demanding sacrifice -- in one translation, "strait is the gate, and narrow is the way, which leads to life, and few there be that find it..."
The Greek word for "door" also meant "gate" according to Strong's Bible Concordance, which points out that "Gates" in antiquity generally represent authority or power. So, in John,

“Very truly I tell you Pharisees, anyone who does not enter the sheep pen by the gate, but climbs in by some other way, is a thief and a robber. The one who enters by the gate is the shepherd of the sheep. The gatekeeper opens the gate for him, and the sheep listen to his voice. He calls his own sheep by name and leads them out. When he has brought out all his own, he goes on ahead of them, and his sheep follow him because they know his voice. (John 10:1-4, NIV)

The Qur'an uses gate in several senses, including what is evidently an idiom in Semitic languages, that when the "gates of heaven" are opened, it means that it is raining. Water, the source of all life, would then be a symbol of the bounty of God to be derived from adherence to the reciprocity taught by the Golden Rule. Heaven, and hell, are depicted as having seven gates, and interestingly, there is a literal gate to the Bab's hometown of Shiraz called the Qur'an Gate. For centuries a pair of copies of the Quran were kept overhead to bless the journey of those who passed underfoot through the gate. I wonder if Mullah Husayn passed through that gate in search of the Bab?
We are all blessed in this Faith to pass through the narrow gate of the Bab's teachings into a holy new Bethel, or house of God. 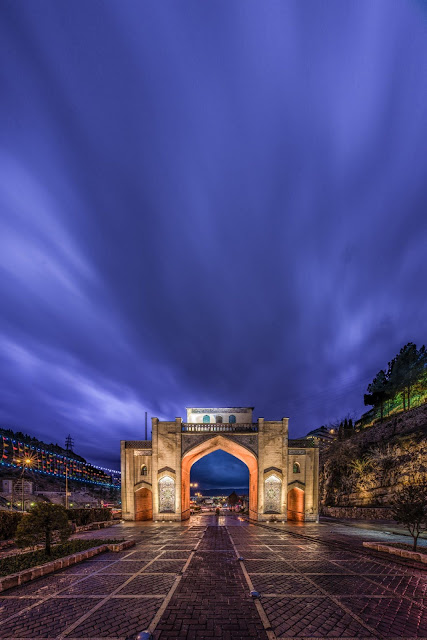 Contra: In Twelver Shiah Islam, the Bab is not the Hidden Imam. Rather, a Bab is one of four successive intermediaries between the Hidden Imam and the faithful.

So, He has been demoted? I would think that any who read more than a page of His Writings would get the idea that He is a bit higher than that. Saiedi deals with this in the first part of Gate of the Heart...
Contra: He is the Primal Point, exalted beyond our abilities to understand.
Be that as it may, in Twelver theology the Babs were intermediaries between the Hidden Imam and the faithful. In initially claiming a title associated with these intermediaries, He lasted a bit longer than just having everyone refer to Him as Imam Mahdi, at the get go.

JET: I wrote the above to demonstrate that the term Gate has central significance in the covenant, both moral and eschatological. The term "gate" pervades all Abrahamic religions. The idea that the Bab was one of the deputies mentioned during the "occultation" is a mere prelude, not a part of the symphony, like when the musicians are tuning up their instruments before the composition starts.

Contra: Please fix your short answer which mistakenly asserts that in Shia Islam “Bab” is another term for the Hidden Imam. Actual Twelver Muslims say Bahá’ís misrepresent their faith. Your statements are making them right.
JET: They should probably brush up on their own beliefs:
"Central to the beliefs of Twelver Shia is the story of the hidden imam, Muhammad al-Mahdi, or simply the “mahdi,” meaning “divinely guided one.” In 874 A.D., the six-year-old son of the eleventh imam went into hiding to protect himself from the persecution of the reigning Abbasid empire. The Shia believe that he hid himself in a cave below a mosque in Samarra; this cave is blocked by a gate that the Shia call “Bab-al Ghayba,” or the “Gate of Occultation.”
https://www.pbs.org/wnet/wideangle/uncategorized/who-are-the-shia-hidden-imam/1731/
I note that "gate of occultation" is more or less the mirror reverse of a gate to the one God will make manifest, or clear.
Coincidentally, I was just reading in T.K. Cheyne's Reconciliation of Races and Religions that both the forerunners of the Bab considered themselves, though they did not necessarily openly proclaim, that they were "babs" or gates to the hidden Imam.
"Shaykh Ahmad of Ahsa in the province of Bahrain... knew full well that he was chosen of God to prepare men's hearts for the more complete truth shortly to be revealed, and that through him access to the hidden twelfth Imam Mahdi was reopened." (p. 8)
"Seyyid Kazim of Resht... himself a Gate, he discerned the successor by whom he was to be overshadowed... " (p.9) Cheyne wonders how long Ali Muhammad was a student of Kazim. "It was long enough to make him a Sheykhite and to justify Ali Muhammad in his own eyes for raising Sheykh Ahmad and the Seyyid Kazim to the dignity of Bab." (p. 10)
Cheyne's scholarship is not the latest, but he was familiar with the original languages involved and he used this term "bab", which makes me think that when we say they were "forerunners," the word being translated is "bab." Haters gonna hate and liars gonna lie, but the Shiihs, as a bigwig hater and liar recently put it, "should just get over it." Some things are lost in translation when speaking English, and bab slash forerunner is one of them.
Abdu'l-Baha, in Traveller's Narrative:
"In the year one thousand two hundred and sixty [A.H.], when He was in His twenty-fifth year, certain signs became apparent in His conduct, behavior, manners, and demeanor whereby it became evident in Shiraz that He had some conflict in His mind and some other flight beneath His wing. He began to speak and to declare the rank of Bab-hood.* Now what He intended by the term Bab [Gate] was this, that He was the channel of grace from some great Person still behind the veil of glory, Who was the possessor of countless and boundless perfections, by Whose will He moved, and to the bond of Whose love He clung. And in the first book which He wrote in explanation of the Surih of Joseph,* He addressed Himself in all passages to that Person unseen from Whom He received help and grace, sought for aid in the arrangement of His preliminaries, and craved the sacrifice of life in the way of His love." (Abdu'l-Baha, A Traveller's Narrative, p. 3, www.bahai.org/r/112826117)

In the same book the Master talks about how early in His Mission, the Bab's "gatehood" became evident after a talk in a Mosque, that being the start of the real suppression and persecution:
"One day they summoned Him to the mosque urging and constraining Him to recant, but He discoursed from the pulpit in such wise as to silence and subdue those present and to stablish and strengthen His followers. It was then supposed that He claimed to be the medium of grace from His Highness the Lord of the Age (upon Him be peace); but afterwards it became known and evident that His meaning was the Gatehood [Bábíyyat] of another city and the mediumship of the graces of another Person Whose qualities and attributes were contained in His books and treatises." (Abdu'l-Baha, Traveller's Narrative, www.bahai.org/r/061184147)


The Bab on his station:
AS to those who deny Him Who is the Sublime Gate of God, for them We have prepared, as justly decreed by God, a sore torment. And He, God, is the Mighty, the Wise. (The Bab, Selections from the Writings of the Bab, p. 44)
O peoples of the world! Whatsoever ye have offered up in the way of the One True God, ye shall indeed find preserved by God, the Preserver, intact at God's Holy Gate. O peoples of the earth! Bear ye allegiance unto this resplendent light wherewith God hath graciously invested Me through the power of infallible Truth, (The Bab, Selections from the Writings of the Bab, p. 48)
O PEOPLE of the earth! By the righteousness of the One true God, I am the Maid of Heaven begotten by the Spirit of Baha, abiding within the Mansion hewn out of a mass of ruby, tender and vibrant; ...Glorified be God, His Creator, the Lord of everlasting sovereignty. Verily He is none other but the servant of God, the Gate of the Remnant of God your Lord, the Sovereign Truth. (The Bab, Selections. 53 - 55)
Posted by badijet@gmail.com at 9:56 AM No comments: