First of a Series of Essays on Corruption

We had our annual meeting celebrating Human Rights Day this Wednesday, featuring this time Mrs. Mehri Muvaddat, from Toronto, who spoke of her suffering under the sadistic hands of the Mullocracy. During the early years of the Iranian Revolution she had the honour of being elected to a Local Spiritual Assembly, which meant a spell of several months in Evin Prison. As a lawyer, she had the contacts to get herself bailed out, but she did not succeed in saving her husband, a brilliant refrigeration engineer, who was shot.

Since I read a lot of science, I have been stumbling over certain nonsense written by members of my former "religion," atheism. As a result, I could not resist asking one of their questions, "What kind of a God would allow this kind of thing to happen? Was not your faith tested when they all but destroyed your family?" She admitted that it was a test and followed up with a pretty good answer, citing Abdu'l-Baha's teaching that we are better off when religions do harm, but that much good can come of it when it is done right. Then I asked, "Why do you think they are doing this to minority faiths?" Her answer was more than adequate, eloquent even. It can be summed up in one word: corruption. And one more word, lust for power. Okay, three words.

To my surprise, one thing I noticed is that I evidently have only written a couple of essays directly on corruption over the years. So maybe what I will do over the next week or so is to write a few rough essays about corruption, using some of the relatively rich store of material I have saved up here. Unlike my normal writing for this book, I will be free to use Baha'i material, which, believe me, makes it a lot easier for me. 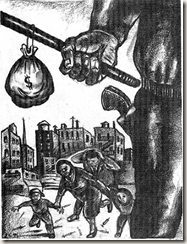 I have glanced over some of what the internet has to offer about corruption. Transparency International, an NGO from Germany that monitors corruption in governments around the world, offers a colour-coded map of the levels of corruption in nations around the planet. You can look at it at:

The first thing I noticed was that Canada, along with Australia and a couple of other countries, was the squeaky cleanest country in the world. I felt pride mixed with some confusion at that news. It is true that Canada follows the Master's advice in Secret of Divine Civilization not to underpay one's bureaucrats. We treat them well, and their unions, CUPE and others, are among the most powerful interest groups in Canada. They make sure that employees of the government are well treated. To skimp on pay for officials, especially police officers, is a golden invitation to corruption.

Low pay is one invitation to corruption, but not the only one.

Last night at our Philosopher's Cafe at the Wainfleet Library, we had a broad ranging conversation ostensibly about "Advice." One of our regulars, Stan, arrived late and was bewildered to find that from the innocuous conversation starter of "advice," we had wandered way over to the excesses by the Toronto Police Services at the recent G20 summit in Toronto -- at the price of over a billion dollars taxpayers got the largest mass arrest and worst violation of human rights in Canadian history. In the early 1970's Canadians were traumatized by Trudeau's invocation of the War Measures Act in response to terrorists in Quebec. But at least Trudeau had taken the question to Parliament. This travesty at the Toronto G20 summit was done in secret. Even most Ontario politicians did not know that an obscure law had been invoked until jails and holding cells were packed with crowds of innocent victims. Somehow, the secretive cabals in power today have managed to make Trudeau at his darkest hour look good! By bypassing due process, modern power brokers transgress worse than Trudeau did almost no protest and trauma on the part of the public. Surely this is corruption to a high degree.

Amusingly but also tragically, one of these incarcerated suspects happened to be named "Adam Nobody." Seriously. This Nobody guy was being roughed up by three cops, when they asked him his name, as is required by law before an arrest takes place. Thinking that by giving the name "Nobody" he was flouting their authority they beat the living daylights out of him. Since the TPS thugs-in-uniform had had the foresight to cover their name tags, these three cops thought they would get away with this assault. But thanks to the ubiquitous cell phone camera, they were identified and are now up for the wrist-slapping that unlucky cops who are caught red handed sometimes receive. Similarly, the all seeing eye of Little Brother noticed that some of the "protesters" who were breaking windows and lighting police cars on fire were wearing police issue boots. Hmm.

What are the causes and solutions to this sort of corruption? First of all, there has to be financial oversight and transparency all the way down the line. There is no way that a billion dollars should be spent like that behind closed doors, without consultation with the public and their representatives. Every proposal for a large expenditure must be brought to a broad cross section of society and decided openly and correctly. And here’s another idea: make secrecy illegal. We should have done that as soon as the song came out: “Evil grows in the dark… under rocks and trees…” And behind closed doors. 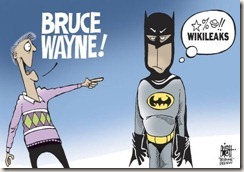 One of our Philosopher's Cafe members expressed dismay that Canadian police officers are going to Afghanistan and Haiti to teach proper police procedure when they can perpetrate what was done in Toronto during that summit -- that is, to requisition two old police cars, strip them of equipment, and then offer them as "bait" to protesters, who started them burning. These old cars were used as pawns in a game of spin doctoring. The cops stood by as they burned for days, causing a media frenzy that justified in the mind of the public the extraordinary expenditures that had been made. If our leaders had any sense or backbone, heads should be rolling at the Toronto Police Services Board for setting up a ploy like that.

A big cause of this mentality is the closed ranks of the police. Every organization, when it is not diverse in makeup and their sources of information are too narrow, sinks into groupthink and corrupt practices. Especially cops. Petty mindedness is surely a major cause of corruption.

One good sign that this is being addressed that I have noticed is that, in Hamilton at least, police officers are volunteering for the new "living book" program at the Hamilton Public Library. A living book is when a member of the public can book a half hour interview with a person of their choice, say an astronaut, carpenter or firefighter, and ask them whatever they want. This sort of contact is just what the average police officer needs, since their job puts them in contact mostly with a narrow cross section of society, literally the lunatic fringe, which creates stereotypes and habitual reactions that are parlous at best.

Next time, some guidance from scripture, Baha'i and earlier, and wise thinkers about the causes and solutions of corruption.