A Note for my Book, on the Oneness of Humanity

Since the mid-1990's tremendous advances in genetics have filled in many crucial details about when and where modern humans came into being. So new are the facts about the human story that no adult living today can grasp its full implications. We should have ingested it with our mother's milk, heard it told and retold in early childhood. We should, throughout our schooling, have thought long and hard about the implications, but we could not do so because the story was so sadly incomplete. 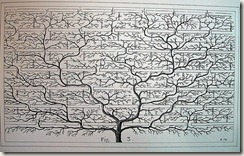 To make an extremely long story short, genetic markers in the male "Y" chromosome indicate with a high degree of certainty that the branches of the human family split off and became isolated from one another far more recently than the most wide-eyed idealist could have imagined, as late as sixty thousand years ago. Archeologically and genetically, this is a mere blink of an eye, a mere two thousand generations. This makes every one of us very closely related to one another.

That is the good news. To express the same thing in another way, though, this shows that the human race at that time came within a hair's breadth of extinction. A major ice age was at its height. Global cooling had frozen much of the world's oceans. As the polar ice caps advanced southwards, the world's shorelines receded many kilometers backwards. With less precipitation, equatorial Africa, although still fairly warm, suffered severe draught, worse than anything we have seen in recent record.

This turned into a great extinction event that killed off not only most of Homo Sapiens but also our many rivals, varied hominids that for millions of years had evolved along with us, including the stronger, larger Neanderthals. All were wiped out in this cataclysm. Only as few as a single village of Homo Sapiens, about sixty individuals, remained alive somewhere in southern Africa. This happy few survived, and gradually repopulated the planet.

Although most traces of this story were long ago expunged from the archeological and anthropological record, the power of genetic tracing has painted a very clear picture of what must have taken place. We are fortunate that after so many ages have passed, the direct descendants of these original survivors remain, their language, culture and technology still intact. They are known as the Khoisan Bushmen of South Africa (http://en.wikipedia.org/wiki/Khoisan ); they still live in the Kalahari desert, under the same dry conditions that were the undoing of similar hominids surrounding them so many ages ago. We know that, unlike their neighbors, who used wooden arrows, the Khoisan learned to hew arrows out of bone. Although small and delicate, these arrows are deadly to the largest animal because the Khoisan smear them with a poison that they find in local plants. 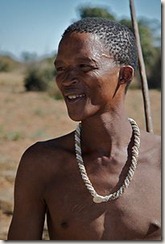 Now that we know who these people really are, one gazes into their faces and discerns traces of every branch of the human tree as we know it today. A Khoisan face has it all. It has the regular features of the first wave of emigrants, the Aboriginals who travelled east and eventually inhabited Australia. It has light brown skin, which hints at the lighter skin of those who later emigrated north in a second wave, the antecedents of the Asian and Caucasoid peoples. These emigrants travelled across Africa, and into central Asia. Here, a single family living north of present-day Afghanistan, with members still alive today, were the ancestors of peoples who spread north, then branched into Europe, and south into China, and through the Bering Strait to the Americas.

Posted by badijet@gmail.com at 3:06 PM