article by John Taylor for the Dunnville Free Press


On October 26th, the Dunnville and District Heritage Association held its monthly meeting on Pauline Johnson, "a poetess between two worlds." The speaker was Kari Hill, a history scholar at McMaster University and volunteer summer tour guide at Chiefswood Museum in Ohsweken. This museum is a restoration of the family home of Pauline Johnson as it looked in the 1880's. Ms. Hill, as a native speaker of the Cayuga language, gave a unique perspective on the origins of this groundbreaking poet, celebrity and performer. Ms Hill emphasised the positive aspects of Pauline Johnson's life and contributions, as well as her culture and place in Canadian and Native history.

Pauline Johnson's "two worlds" came from the union of her parents. Her tie to the Six Nations Confederacy came through her father, George H.M. Johnson (1816-1884), a chief and polyglot speaker of six languages who worked as a translator among the several native languages spoken at the time by the Six Nations. Pauline Johnson's mother was Emily Howell (1824-1898) of Bristol, England, a member of the Quaker Faith and long time anti-slavery activist. They fell in love at first sight and married after a five year engagement, despite opposition from their families. George built their house as an architectural symbol of the union between the native and the English cultures. Its two entrances were intended to say that both cultural worlds are compatible and harmonious.

Pauline grew up with her canoe named "Wildcat", which she took out on excursions alone in nature for as long as three days. The poems of Pauline Johnson are thus inspired by the same river that runs through Dunnville, the Grand. Johnson became a columnist for newspapers, and later travelled the world with her one woman show, travelling alone in a time when an unescorted woman tourist, much less a performer, was an oddity. Pauline's show may have taken advantage of stereotypes about Indians, Hill explained, but she put her own twist on them and used the chance to bridge cultural gaps.

Johnson's performances inspired a recent play and one woman show about Pauline Johnson, featuring Mohawk/Irish actor Sherie Maracle, which, appropriately, was performed at Chiefswood this past summer. For more information, go to http://www.paddlesong.org/ 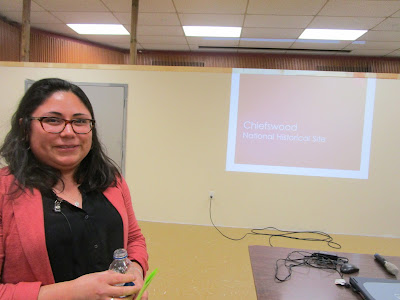 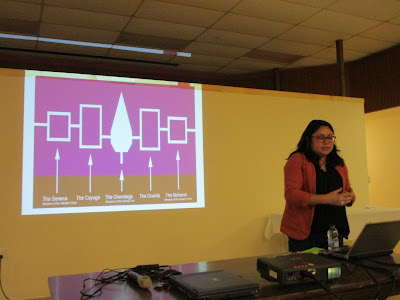 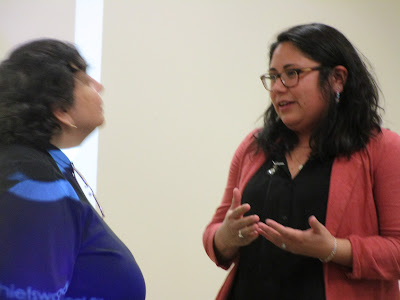 April Cormaci, President of the DDHA, speaks with Kari Hill before the talk.

Posted by badijet@gmail.com at 6:27 AM