In Defense of Food, and our Health

In Defense of Food, and our Health
Article for the Dunnville Free Press
by John Taylor, 2 December, 2016

In the film, Pollan, who is famous for his books on agriculture and diet, tells how after decades of researching what we should eat, he has simplified and encapsulated the implications into only seven words, "Eat food, not too much, mostly plants." He points out that we make about 200 food decisions each day, all influenced by advertising claims and counter claims. Bad choices are leading to poor health, chronic diseases and an epidemic of obesity. Most do not realise that really healthful food does not come from factories. It is to be found in produce aisles and farmer's markets. Their benefits are not advertised, but they are the best for our bodies.

As a society, we are in thrall to a corrupt ideology that Pollan calls "nutritionism," a quasi-science that makes technical advances into ways to increase profit while worsening our diet. For example, the invention of roller milling separated bran from the germ in wheat, which makes the flour for white bread. Worse, sugar went from a rare treat to a cheap commodity put into virtually every factory product. As a result, our intake of sugar now is 1000 times greater. Sixty percent of what we eat is processed food.

The results are unnerving. Studies of the Hadza tribe in Africa, who still have a traditional diet, found that the "useless" bulk in their food, which passes through our digestive system, actually feeds the beneficial bacteria that protect our health. Studies comparing the Hadza to African Americans, whose genome is closest to the Hadza in Chicago, found that by simply adding bulk, that is, following Pollan's seven word prescription instead of the factory produced, "edible food-like substances" we call food, cured them of the chronic ills in only two weeks.

The discussion after the film was led by Kevin Hamilton, the young farmer who runs Shared Harvest Farm, whose organic produce is featured in the Minga Restaurant. He explained how a commitment of 25 dollars a week brings in a bushel full of fresh, organic fruits and vegetables throughout the growing season, which is most of the year. I myself have subscribed to this program for years, and I can attest that it regularly challenges you to cook in ways that I never would have in any other way. 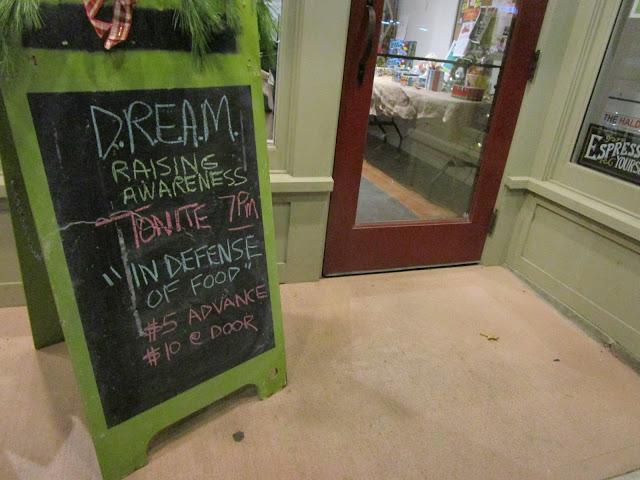 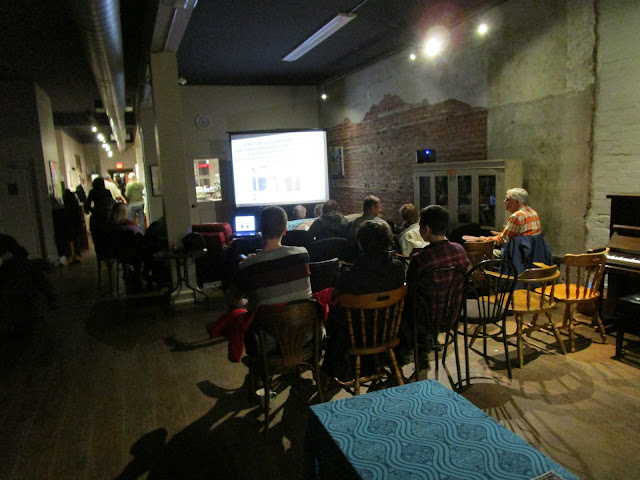 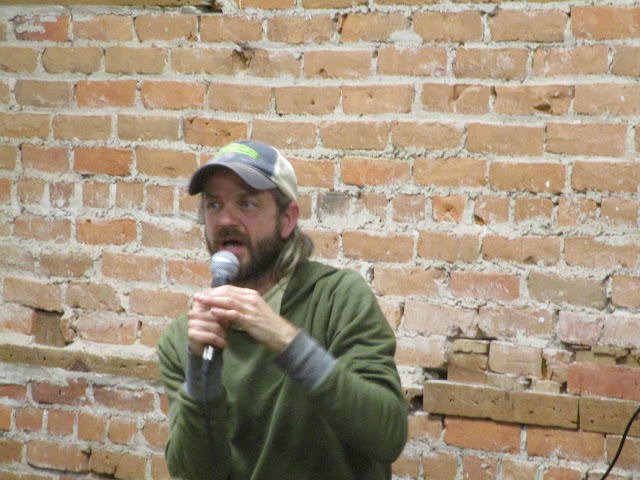 Kevin Hamilton reports that the fund goals for the new farmer's market are almost complete, and that construction will begin by spring. 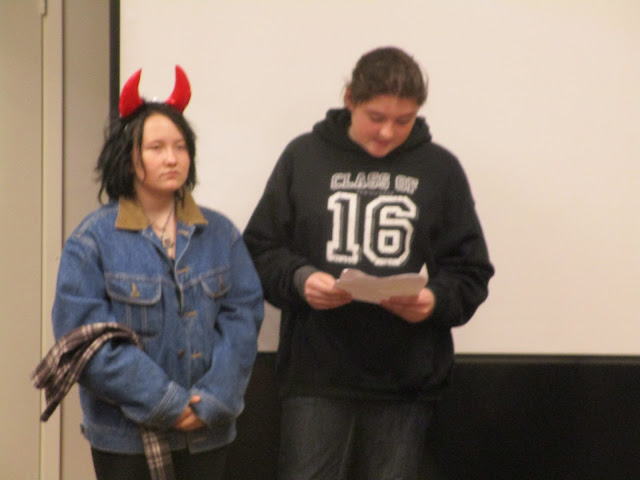 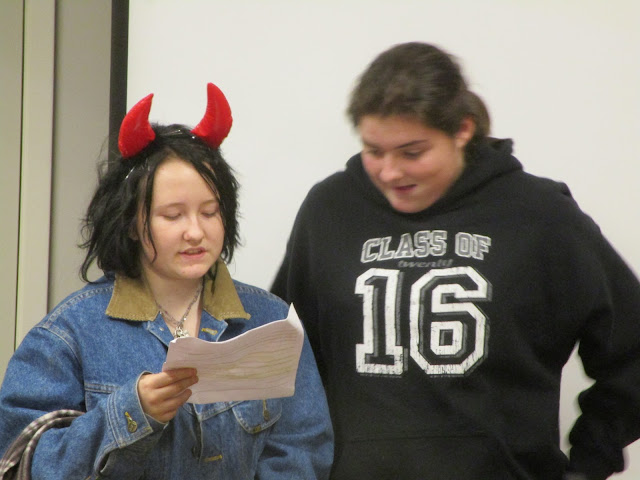 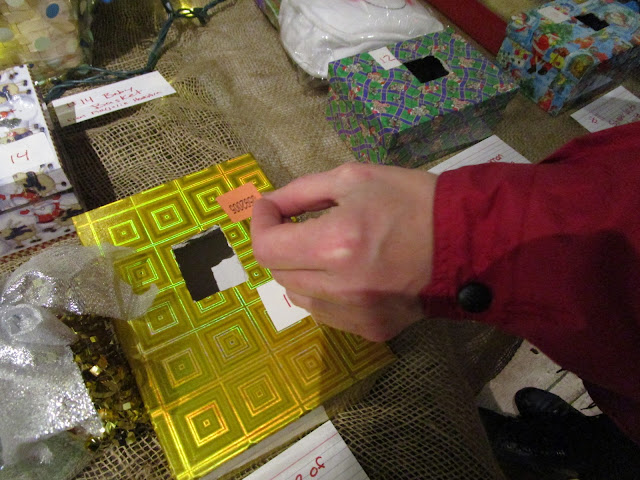 Marie Taylor deposits a ticket for an item in the Penny Sale. 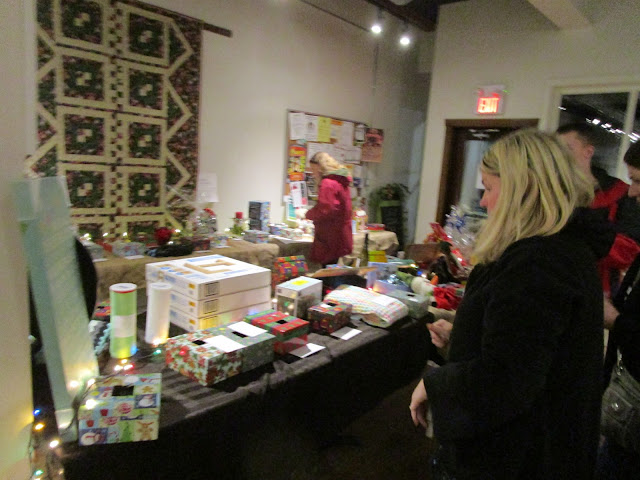 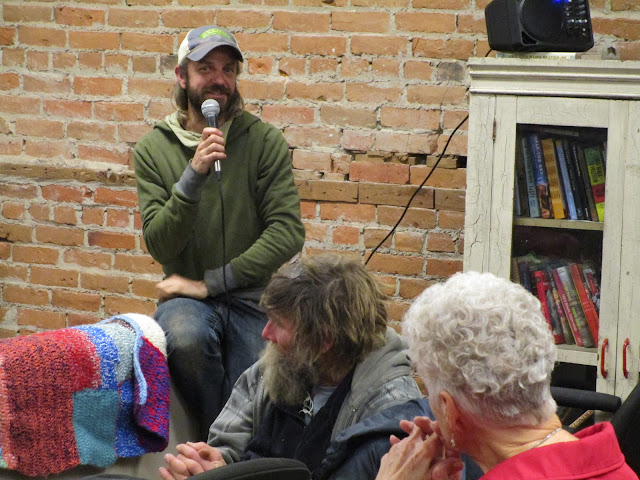 Posted by badijet@gmail.com at 9:34 AM