There is a passage in this Tablet which may not be apparent to some as being a reference to the martyrdom of Haji Muhammad-Riday-i-Isfahani. Baha'u'llah describes this episode with great feeling:

"Day and night this Wronged One yieldeth thanks and praise unto the Lord of men, for it is witnessed that the words of counsel and exhortation We uttered have proved effective and that this people hath evinced such character and conduct as are acceptable in Our sight. This is affirmed by virtue of the event which hath truly cheered the eye of the world, and is none other than the intercession of the friends with the high authorities in favour of their enemies. 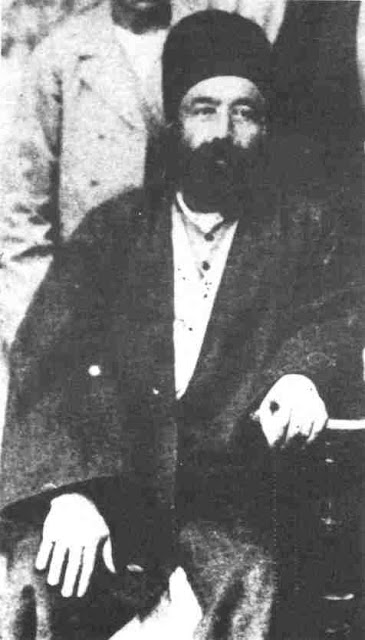 Haji Muhammad-Rida was originally from the province of Khurasan, but lived in Isfahan and worked as a merchant. He was a devoted believer and a very active teacher of the Cause. Because of his teaching activities he was put in prison, but was released after some time. He then left Isfahan and eventually went to 'Akka and attained the presence of Baha'u'llah. Coming into contact with the Person of Baha'u'llah was the cause of igniting within his heart the fire of love and devotion for his Lord. He begged Him to accept him as a martyr and enable him to lay down his life in His path. Baha'u'llah is reported to have told him that it was not necessary, as many souls had already sacrificed their lives in His path. But Haji Muhammad-Rida was so intoxicated with the wine of Baha'u'llah's presence that he wanted to give his all to his Beloved. So he repeated his plea. This time the Blessed Beauty remained silent and he took it as a sign of consent. Later he asked Baha'u'llah to assign for him a city to reside in. He was bidden to proceed to 'Ishqabad. He lived there for several years and was engaged in teaching the Cause among the Muslim population.

On 1 July 1889 Haji Muhammad-Rida received a Tablet from Baha'u'llah in which He praises him for his devoted services, bestows His blessings upon him for his steadfastness and devotion to the Cause, and assures him that all his deeds and aspirations are manifest before Him. He further states that a grievous upheaval has occurred in the city of Ishqabad and describes it as the attack of a serpent upon one who is the recipient of the bounties of His Lord.

Although the identity of the believer who was the target is not disclosed by Baha'u'llah, He prays for Haji Muhammad-Rida that God may give strength to his body and assurance to his heart. This Tablet arrived at a time when Haji Muhammad-Rida had invited all the believers of 'Ishqabad to a feast. When it was read out to the friends, Mirza Abu'l-Fadl explained that although no upheaval had taken place so far in 'Ishqabad, since Baha'u'llah has used the past tense and clearly indicated that one of the believers had been struck down by the enemies, it was an absolute certainty that this upheaval was inevitable. It would happen soon and only one person would be martyred. Haji Muhammad-Rida said to the friends that he believed that he was the believer whose martyrdom Baha'u'llah had foretold in this Tablet. And this happened two months later.

Incensed by the remarkable progress of the Faith in 'Ishqabad, the Shi'ah Muslim community had been secretly planning to assassinate a number of believers. Although their plan did not materialize, they succeeded in murdering Haji Muhammad-Rida. Two men armed with daggers attacked him in the bazaar and stabbed him to death. This was on the morning of 8 September 1889. It is reported that they stabbed him thirty-two times amid the jubilation of a great number of people who had gathered to watch him die. Some of the believers attributed the prayers revealed by Baha'u'llah in the Tablet he had received, which beseeched God to give strength to his body, as an indication of the agonizing and torturous way in which he was to be martyred. The murderers were so bloodthirsty that they were seen licking their daggers which were dripping with blood, until the Russian police arrived and took them into custody.

On discovering the plot, which had been intended to kill a number of prominent Baha'is, the believers sent a petition to General Komaroff, the Governor-General of Transcaspia, and appealed for protection. This was granted to them and in this way the enemies' plans were frustrated. A prolonged investigation was conducted in the law courts where, in the presence of spectators, many Baha'is and non-Baha'is were questioned. At the end the court delivered the verdict of guilty and sentence was pronounced. The two murderers were to be executed by hanging, and a few men accessory to the crime were to be exiled to Siberia.

This was the first time in the history of the Faith that those responsible for killing a Baha'i had been brought to justice. The verdict infuriated the Shi'ah clergy in Persia, who were in the  habit of decorating the murderers of the Baha'is. They made desperate attempts to free the criminals, but did not succeed in influencing the Russian government.

In the meantime, while the prisoners were behind bars awaiting their execution, a number of their relatives accompanied by a few leading merchants visited some prominent Baha'is and begged them to intercede with the government for the commuting of the death sentence. The Baha'is held a meeting, consulted and decided to take action. Mirza Abu'l-Fadl and another believer made representations to the Governor on behalf of the Baha'i community and interceded with the government, in the first place to absolve the murderers of their crime, and if not possible to mitigate their sentences. The Governor was deeply impressed by the attitude of the Baha'is and their willingness to forgive the assassins.

This request was passed on to the Czar, who approved the commuting of the sentences. But the decision was kept a secret and only revealed dramatically at the last moment. On the execution day gallows were erected and graves dug. The prisoners dressed in white robes and ready for execution were brought out of the prison and led to the scaffold. When the moment arrived a government official, in the presence of great multitudes, read out a proclamation announcing that as a result of the intercession of the Baha'is with the government requesting pardon for their enemies, His Majesty the Czar had commuted the sentences of the two murderers to life imprisonment in Siberia, and halved the sentences of the others.

This act of intercession on behalf of their enemies was acclaimed by Baha'u'llah as a princely deed. It brought great satisfaction to His heart that through His counsels and exhortations for well-nigh forty years, the believers had at last risen to such heights of faith as to intercede for the release of those who were their deadly enemies.

Full paragraph from the Tablet of the World:

"Day and night this Wronged One yieldeth thanks and praise unto the Lord of men, for it is witnessed that the words of counsel and exhortation We uttered have proved effective and that this people hath evinced such character and conduct as are acceptable in Our sight. This is affirmed by virtue of the event which hath truly cheered the eye of the world, and is none other than the intercession of the friends with the high authorities in favor of their enemies. Indeed one's righteous deeds testify to the truth of one’s words. We cherish the hope that men of piety may illumine the world through the radiant light of their conduct, and We entreat the Almighty -- glorified and exalted is He -- to grant that everyone may in this Day remain steadfast in His love and stand firm in His Cause. He is, in truth, the Protector of those who are wholly devoted to Him and observe His precepts." (Tablet of the World, Tablets of Baha’u’llah, www.bahai.org/r/840010249)

This guy, Muhammad Rida, was the first pioneer to Ishqabad. The Shi'ah Muslims there did not take kindly to his success in converting local Muslims to the Baha'i Faith. They responded as they had always done in Persia, that is, they sent out a hit man to off him with extreme prejudice. This had always earned rewards from the authorities. But this time the murder was, for the first time in Baha'i history, prosecuted by the authorities.
Here, I reproduce the entire selection from Taherzadeh's Study on the Writings of Baha'u'llah, a sub-section of the chapter about the Lawh-i-Dunya, one of His last Tablets. Here he mentions the martyrdom of Muhammad Rida and the "praiseworthy" forgiveness by the new Baha'is of Ishqabad that followed upon that prosecution. This is supplemental to our Zoom deepening on chapters 76 and 77 of Some Answered Questions.
Interestingly, in Some Answered Questions Abdu'l-Baha, explaining why it is not possible for the body politic to forgive crimes, says that by meting out sanctions society punishes "without prejudice."
"The body politic is not prompted by ill will in meting out its punishment; it acts without prejudice and does not seek to gratify a sense of vengeance." (Some Answered Questions, www.bahai.org/r/621210423)
As the story of Muhammad Rida points out, the Russian authorities in Isqabad came up with a sadistic way to forgive the murderers of Muhammad Rida, with great prejudice, by doing so at the last minute while the firing squad was about to dole out their death penalty. Their sentence was thus reduced to exile in Siberia. The same thing happened to Dostoevsky and other famous Russian writers. In Dostoevsky, at least, this trauma led to his conversion to religion.
That great scholar, gentleman and student of the last major work of Baha'u'llah, Steve Maclean, points out that Baha'u'llah also mentions this Muhammad Rida of Isfahan here,
"Likewise, ponder thou upon the martyrdom of Ḥájí Muḥammad-Riḍá in the City of Love (‘Ishqábád). The tyrants of the earth have subjected that wronged one to such trials as have caused many foreigners to weep and lament for, as reported and ascertained, no less than thirty-two wounds were inflicted upon his blessed body. Yet none of the faithful transgressed My commandment, nor raised his hand in resistance. Come what might, they refused to allow their own inclinations to supersede that which the Book hath decreed, though a considerable number of this people have resided, and still reside, in that city." (Epistle to the Son of the Wolf, www.bahai.org/r/684455299)
"We entreat His Majesty the Sháh,—may God, hallowed and glorified be He, assist him—himself to ponder upon these things, and to judge with equity and justice. Although in recent years a number of the faithful have, in most of the cities of Persia, suffered themselves to be killed rather than kill, yet the hatred smouldering in certain hearts hath blazed more fiercely than before. For the victims of oppression to intercede in favor of their enemies is, in the estimation of rulers, a princely deed. Some must have certainly heard that this oppressed people have, in that city (‘Ishqábád), pleaded with the Governor on behalf of their murderers, and asked for the mitigation of their sentence. Take, then, good heed, ye who are men of insight!" (Epistle to the Son of the Wolf, www.bahai.org/r/630211313)
Posted by badijet@gmail.com at 9:02 AM