For centuries farsighted writers, scientists and engineers, most notable among them Jules Verne and Buckminster Fuller, have put forward ideas to improve our infrastructure. The most difficult of these megaprojects remain undone, including domed cities, moving sidewalks, pneumatic tube transit and modular housing. Others, long dismissed as utopian pipe dreams, are already completed, such as train tunnels below the Alps and under the English channel, not to mention satellites and GPS location. Wikipedia's article on megaprojects lists hundreds of other schemes, all formerly impracticable, that present technology allows and which are in various stages of planning, including some already under construction.

One megaproject is so daunting that nothing like it has ever been attempted. This is the World Belt, a long corridor of superconducting power lines crossing and joining the continents. This energy grid would both deliver electricity and store it. The peculiar properties of superconduction permit power lines to act as a huge storage battery. This is the ideal enabler for green energy, wind, wave and solar, all of which are intermittent. These high voltage direct current (HVDC) lines are actually more efficient transmitting electricity over long distances than our present grid, using alternating current, is over much shorter distances. 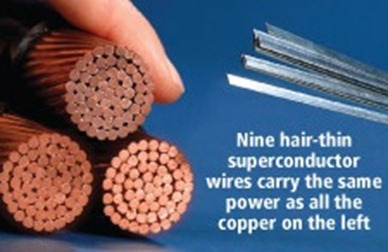 This world belt would permanently shift the balance of electrical power towards green energy. As Buckminster Fuller tirelessly pointed out in his public talks (two of which I had the honour of attending), one side of our planet is always bathed in sunlight while the other languishes in darkness. A global grid connecting these shifting dark and light halves of Earth would pay for itself very quickly. It would transmit energy from where it is free, bountiful and unneeded to where it is in demand, from bright to dark areas, from warm to cold regions, and from low population desert areas to those with a high population.

Once the global grid makes the entire energy resources of the planet available anywhere at a very low price, it will be economical to undertake a similar and parallel megaproject to reorient the all-important area of transport, transit, travel and tourism. A rapid transportation line running near or alongside the World Belt's power lines could derive power directly from this energy grid.

Together, these two, power and transport, would constitute the vascular system first of continental union, then of a global democratic super-state. This technical development allows us to move ourselves and our stuff from one place to another with a speed and efficiency approaching electronic communications, which is virtually instantaneous. It will permit our built world to enter into the third dimension; as Fuller pointed out, until now we have built only two dimensionally, scratching the surface of earth. Our internal processes can be seen from above, like bacteria, amoebas and other unicellular creatures. Once we have these veins and arteries, however, we can build in every direction, erecting floating cities on the ocean, flying domes in the air, and boring underground, into mountains and underground.

Ambitious projects like this require undreamed of integration and interdependence, however, not only physical but mental and spiritual as well. We are unlikely to move forward in this direction without the advances in politics, religion and education that John Amos Comenius laid out for us back in the middle of the Seventeenth Century. We discussed his analyses and proposals at length in the first volume of this series, Beyond Borders. Once we remove our habits and mental blocks, we will learn to balance our lives in an integrated way. Then, we can erect the machineries of world democracy, of which megaprojects such as the world belt are only an outer expression.

Posted by badijet@gmail.com at 5:48 PM