I enjoy the comic genius of Ricky Gervais. His depiction of an impervious, self-contradicting boss man in the original British version of the TV program "The Office," is absolutely hilarious. You listen to this egotistical maniac with a mixture of horror and dismay. How can anybody put his foot that far into his mouth and not suffocate? Gervais performance is based on an actual boss that he says he had once, but the type is a universal one. 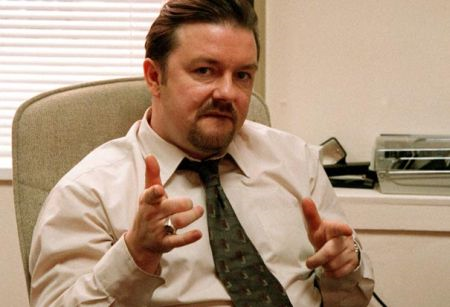 Anybody who has ever entered the workplace has no choice but to meet such a manager, an absolute idiot who talks far longer than his thoughts can carry him, twisting himself around his own superficial jargon and catch words, imagining himself a poetic master, the sort of speaker who would be mocked, ridiculed and laughed off the stage under any circumstances other than the one he is in, that is, standing before a captive audience of underlings. He is not so much sadistic as utterly clueless; on one level he knows that his listeners depend for their paychecks on taking what he says serious heed, but he honestly thinks that he is an entertainer, a guru, a beloved friend to those under him, and that he can disregard every rhetorical convention, including internal logic.

His performance in the movie "The Invention of Lying" takes second place to the utter freshness and originality of his brilliant idea of a story about a world where the ability to deceive has been somehow removed from the gene pool. A normal schlep like him, or, I have to admit, myself, who is capable of deception, would pretty much rule. He could write his own ticket, without even having to lie well. It is a charming movie, a good one to watch for those who in their institutes are memorizing the Master's observation that "truthfulness is the foundation of character..."

Anyway, I heard about the podcasts Gervais was having with two of his producers and was not particularly interested. I saw the promos for the animated version that came out of it, and I remained unimpressed. The series, the Ricky Gervais Show, is now into its second season, and is available, thanks to my father's paying the entire cable bill here, on "on demand." In a moment of boredom, I watched a recent episode or two from the second season and remained unimpressed. 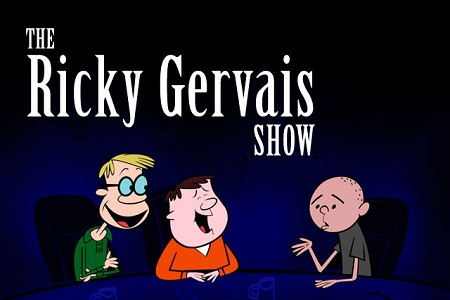 For one thing, the British street slang they used was off-putting. One word brought on some nostalgia though, "mental," in the sense of, "You don't have to go all mental about it," meaning, "do not take this to an extreme." I remember in grade school hearing and using the word casually, then in high school in the 1970's the expression disappeared. I do not know if it was the fact that "mental" was part Canadian argot but not of the American slang that dominates the media, or if "mental" was a victim of political correctness, or, most probably, both, but I have not heard "mental" being used like that for decades.

Finally, one day I gave the Gervais show one more chance. Then, as I was watching the episode, it hit me. I do not know if it was the mood I was in or what, but suddenly I started laughing uproariously. I could not stop laughing until the entire half hour was over.

Definitely, the Ricky Gervais Show is an acquired taste.

I realized that at this point in my life I need a daily humor boost, so I went back to episode one, season one and took a ration of an episode or two every day. It gave a lift to my day to have my sides split and roll on the ground laughing. The kids were unimpressed. They could not fathom why I would listen to incomprehensible gibberish interspersed with non-sequential cartoon illustrations.

I noticed that season one started out with Gervais openly mocking the main subject of the show, "That round headed buffoon that is, Karl Pilkington." They read on air some of the letters and emails that they were getting, and it is pretty clear that sympathetic listeners were siding with the "round headed buffoon." In the second season Gervais clearly moderates his mocking attitude, and this actually improves the show considerably.

Where do my laughs come from? As I watch I sometimes wonder. I do like these three fellows. You cannot really laugh at somebody unless you like them. Okay, there are exceptions. I am thinking of a certain grotesque dictator right now who is going on air declaring war on his own people. I do not like him, but I do laugh, along with many others in the Arab world, when a journalist Autotunes his Gervais-like performance as big boss to rap lyrics. But generally speaking, laughter is a function of love, not hate.

Clearly, these are three buddies who hang around with one another even when they do not have to. They have feelings for each another that you can only call love, in spite of all the ribbing. That is the real secret, I think, of the belly laughs I am getting out of this. Such friendships among men are rarer here in North America than in Britain. This kind of laughter is not an outcome of wit or jokes but of fellowship. This is a fact of life that the insipid American sitcoms that infest commercial television forgot long ago. Here the sense of harmony and fellowship among these three men is real and palpable. The humor, once you catch on to it, is intense.

Anyway, in season two as the mockery moderates Karl Pilkington starts to flower into less of a buffoon than a sort of original thinker, a real poet in the raw. During Season One they had gone from a feature called "Monkey News" to a reading from Karl's diary. Gervais rightly recognizes these diary entries, written in block letters in a huge volume, as "one of the best diaries ever written, absolutely brilliant!"

Some people love animals and nature in soppy way, but Karl is more than that. He is also capable of being annoyed, frustrated and bothered by what he sees on his walks in natural surroundings. He observes the behavior of insects, mollusks and other animals with annoyance as well as wonder. I ask you, is that not a deeper sort of love than the sentimental, stereotypical observations of people like, well, myself, when I observe nature? It has got to love if you can react with the full gamut of emotions to the phenomena of nature.

Anyway, I was going through the second season when my eleven year old son Thomas took more than a few glances at the show. He especially liked Karl Pilkington's relationship to animals. It took him maybe three times longer to start to like the show, but now he is asking to see the show every morning.

I am now fielding questions like, "What is a bloke?"

So now I am going through the entire series with him a second time. There is profanity there, but nothing worse than he will hear if he sticks his head outside the door and listens to the voices in the street. It is not entirely as funny for me seeing it the second time, but, as Adam Smith says in the book he regarded as his masterpiece, The Theory of Moral Sentiments, (not the better known "Wealth of Nations"), one's pleasure in sharing a joy is almost as great, and in some ways greater, than it was the first time. I will give the last word to Smith.

I think what he says here explains why Karl Pilkington takes pleasure in this company of mockers (they sympathize with his annoyance little things in the world), even though he is the butt of almost every joke. Smith's observation also explains better than I have here why I cannot stop laughing every time I watch the Ricky Gervais Show.

"When we have read a book or poem so often that we can no longer find any amusement in reading it by ourselves, we can still take pleasure in reading it to a companion. To him it has all the graces of novelty; we enter into the surprise and admiration which it naturally excites in him, but which it is no longer capable of exciting in us; we consider all the ideas which it presents rather in the light in which they appear to him, than in that in which they appear to ourselves, and we are amused by sympathy with his amusement which thus enlivens our own. 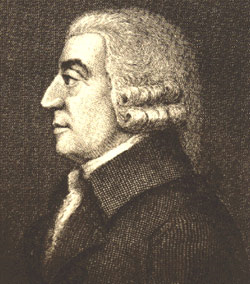 "On the contrary, we should be vexed if he did not seem to be entertained with it, and we could no longer take any pleasure in reading it to him. It is the same case here. The mirth of the company, no doubt, enlivens our own mirth, and their silence, no doubt, disappoints us.

"But though this may contribute both to the pleasure which we derive from the one, and to the pain which we feel from the other, it is by no means the sole cause of either; and this correspondence of the sentiments of others with our own appears to be a cause of pleasure, and the want of it a cause of pain, which cannot be accounted for in this manner. The sympathy, which my friends express with my joy, might, indeed, give me pleasure by enlivening that joy: but that which they express with my grief could give me none, if it served only to enliven that grief.

Posted by badijet@gmail.com at 2:02 PM

In the last 2 paragraphs, where you are quoting Adam Smith, I had a difficulty deciding which sentences or sentence I liked the best, as people don't blog like that on the Net, and we don't find this style unless we actively hunt for it in classic literature. I chose this:

"it alleviates grief by insinuating into the heart almost the only agreeable sensation which it is at that time capable of receiving." (Oh I have forgotten how to use HTML tags, and couldn't close the italics....:-(

I can only refer in a gustatory way, my delight in feasting on the alleviation of grief by insinuating a friend's sympathy into my grieving heart heart. It may seem meager now that I am a Bahai as we offer what ever we have at the threshold in order to enter a place where He is felt to be.

Finally I read all your writing about Ricky Gervais, really. I have not seen the show, can't take the time for the foreseeable future..however your post reminded me of my younger days in LA CA, when I used to appreciate what was on the American tube. Uhhh oh. its time to quit, I hear the chosen elementary school student on the city-wide PA system announcing that kids will begin "coming" home, or is it "going" home? Yes this is a reference to the differences of English and Japanese