Here's my article for the Free Press about a recent meeting of the Dunnville Heritage Association. It is a mini history of Dunnville.

A STROLL AROUND DUNNVILLE 100 YEARS AGO
By John Taylor

Their researcher, Judy, showed in-depth knowledge of the lives of early Dunnvillians, including a prominent opera singer and a successful businessman whose enterprises marked the skyline of our town for almost a century.

Dunnville came into its own when in 1829 a feeder canal was built right through Main Street. Around this time, three millponds were excavated by the canal to give hydraulic power to two mills and a factory. In 1850 some five hundred vessels sailed through Dunnville and continued on upriver to Brantford. A dam was built across the Grand River here in 1837, along with a toll bridge. It cost one penny for a pedestrian to walk across the bridge to Bing. 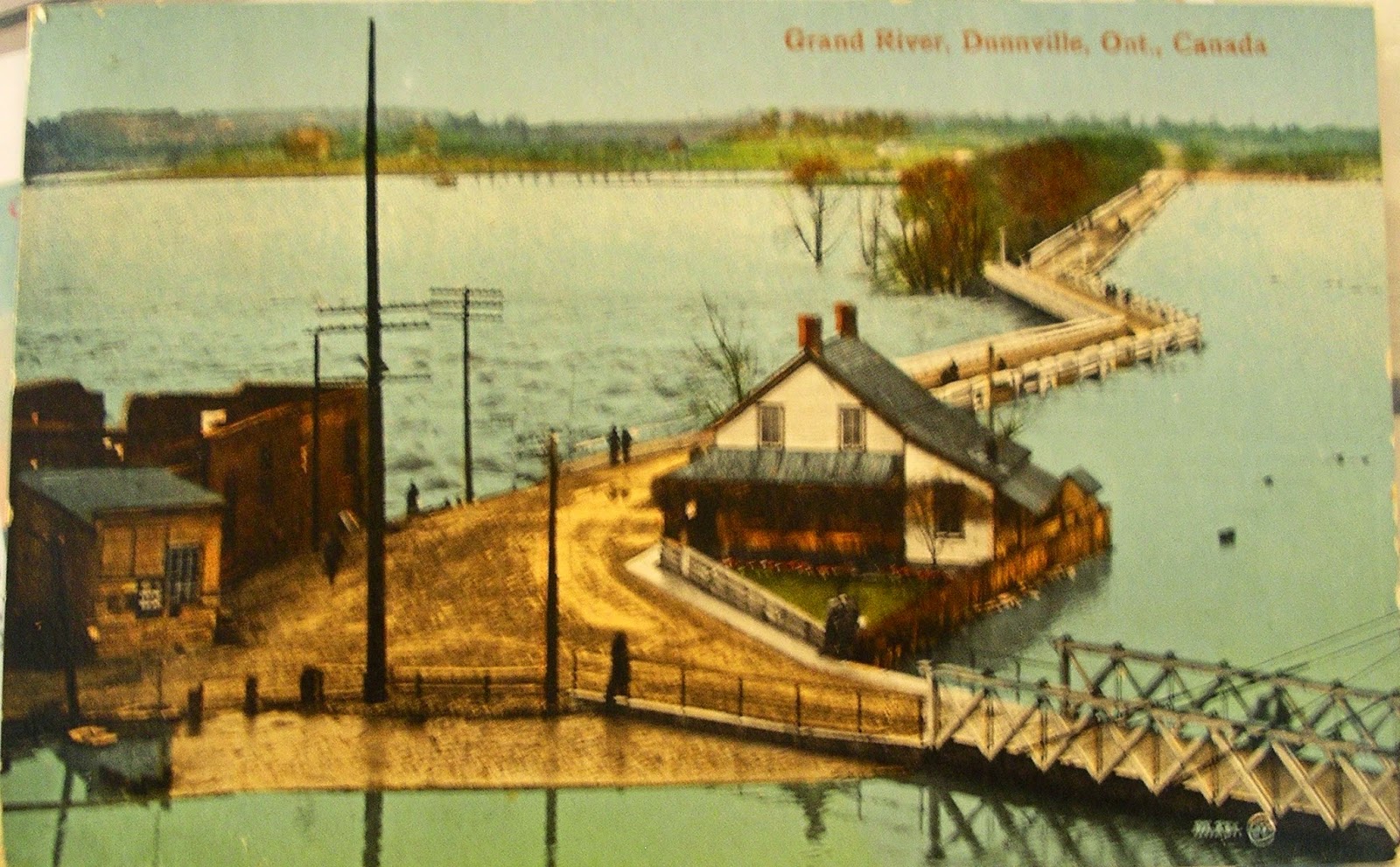 Judy gave us a taste of an upcoming lecture in this series when she showed a British gunboat, which was sent here to defend against the Fenian Raids. The railway came to town in 1852 with the Grand Trunk Railroad, which built a large and very beautiful terminal, which, like many of the large buildings here, eventually burned down. In 1884 the Dunnville Electric Light Company was founded, making us about the third town in Canada to be electrified.

A second railway, the TH&B line, was built in 1914 and made it possible to go by rail to Hamilton. One of its first jobs was to carry local young men off to fight as soldiers in the First World War. In 1920, the feeder canal within town was filled in, to be replaced by the present Main Street.

At the turn of the Twentieth Century the village reached a population of two thousand people and transitioned from a village to a town. It turned out to be a baptism by fire and water, however, as several major structures burned down and the entire town was inundated several times between 1910 and 1920. The entire bridge was wiped out by ice in 1918. Impressive photographs taken at the time show women in long dresses and parasols walking in raging waters on top of a stone structure at the corner of Broad and Chestnut Streets. 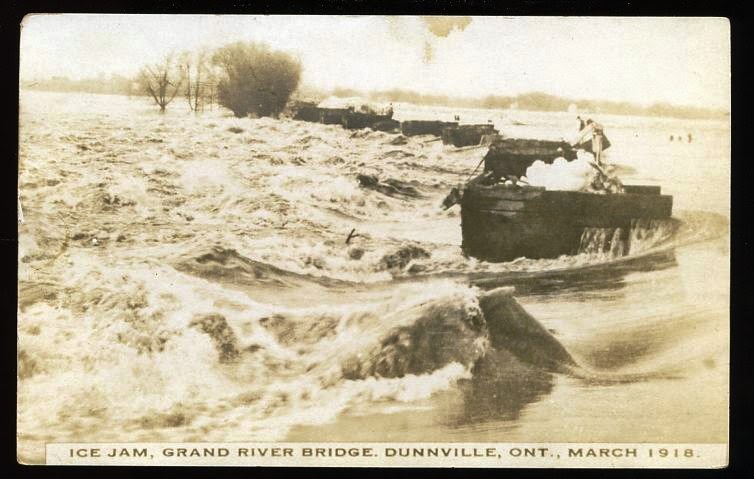 For many years the showpiece structure in town was the original Victoria Hotel, which gained international publicity when it was lost in yet another conflagration.

Judy told the story of several local businesses, which included the Monarch Knitting Mill, which started in 1903 and grew at one point to be the largest such business in Canada. When the wool market collapsed it was finally torn down in 1973. Other businesses included a hammock factory, a large ice collection facility, the Lalor Canning Factory (Grand River Brand canned fruits), the CanAm engine company, which built tractors, and a mill on the site of the present Optimist Hall. One of the oldest buildings still standing is the Queen’s Hotel, erected in 1840.

For me, the most impressive part was the story of Central Park. Sold to the town for 400 dollars, it had its finest hour when it was renovated for the diamond jubilee of Queen Victoria in 1897. The two cannons in our park, I was surprised to learn, were moved there then, surplus from the Crimean War. If I had known that, I would have told my children, who loved to crawl all over these cannon, the story of the Charge of the Light Brigade and the pioneering work of Florence Nightingale, both of which took place in that war.

The next presentation by the Dunnville Heritage Association will be “World War One, The 114th Battalion, The Battle of Vimy Ridge,” on Wednesday, 25 March, 7PM, at Grandview Lodge, 657 Lock Street West, Dunnville.

Posted by badijet@gmail.com at 5:03 PM