I picked out Flora Tristan for many of the same reasons I chose in this book John Amos Comenius. Both at first glance seem old fashioned but upon further examination turn out to be ahead not only of their own time but of our time as well. We have looked in this way at Flora Tristan as an early socialist; far from being a footnote to history, good only for trivia questions, her contribution is as yet unappreciated. If socialists had followed her lead rather than that of the Marxist rebels who followed, our economy would be infinitely further advanced than it is today. 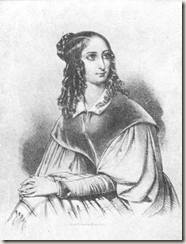 The same is true of Tristan as a feminist.

In the English speaking world modern feminists -- when they have heard of her at all -- honour Flora Tristan's status as a pioneer of equality for women. However, the actual content of her message tends to grate. They find it humiliating, for example, that she did not address other women but on the whole spoke to men, as power brokers, workers, husbands and fathers. Worse, she called not only for equality for women but also for a special "moralizing mission" for women.

Contemporary feminism did not follow this path. Why should women have any more concern for morality than men? Why, indeed. Flora Tristan would have been shocked that any woman would ask such a question. She would have young women actively trying to stamp out practices like imbibing alcohol or swearing, not exercising "equality" by drinking and cussing as much as young men do. Feminism tried this approach for a while but gradually learned to narrow the focus onto specific barriers to equality, for example, gaining votes for women, breaking the glass ceiling and enforcing wage equity laws.

Now that education is open to women and these goals have been attained, at least in wealthy countries, feminism in the public mind has receded into the background noise of a thousand other special interest lobbies. This is a serious problem, since an advocate for women is not promoting a special interest, she is defending the majority of the human race. Every bit as much as the modern socialist, feminists should be looking back at Flora Tristan and asking,

"Could it be that she had the right idea all along?" 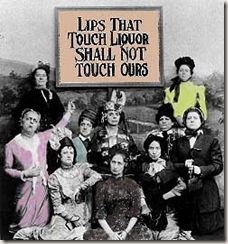 As I write, for example, the news is full of a major study on the ill effects of various drugs and addictions. On a damage scale for individuals and society, where one hundred is the most harm and zero is no harm at all, alcohol scored a 60 while heroine, the next most noxious substance, heroine, scored only 40. Tobacco scored .... After almost two centuries Flora Tristan is still not far wrong in pointing to alcohol as a barrier to women's rights. She admonished working class men who fled their homes and spent their leisure drinking in the local tavern, then coming home drunk and embittered, and entering into a cycle of violence in the home. Today's solution is for women to join men in the bars, which only raises the place of alcohol on the damage scale. Although the link between inebriation and domestic violence is well established by social science research, activists concentrate only on the attacks on women, leaving them open to accusations of being anti-male.

The answer is for feminists to get off the ethical fence and do what Flora Tristan (and most of her contemporary feminists as well) suggested, push for abstinence, or at least temperance, from all addictive substances. Bereft of a broader moralizing mission, the rights of women sinks in the same truculence, parochialism and in-fighting that broke socialism.

However, Flora Tristan was far more radical than merely advocating the platform of the Women's Temperance League. Consider this prediction, which she made in The Worker's Union,

"By a very simple calculation it is obvious that wealth will increase indefinitely when women (half of the human race) are summoned to bring into social service their intelligence, strength, and ability. This is as easy to understand as that two is double one." (Flora Tristan, "A Passage From Flora Tristan's l'Union Ouvriere," Translated by Doris and Paul Beik, http://www.mtholyoke.edu/courses/rschwart/hist255/at/tristan_text.html)

Tristan was quite correct in this prophesy. The amount of wealth in the world exploded right around the same time when women gained access to higher education and entered the workplace in droves. Nonetheless, women continue to own only a tiny percentage of land and capital, and almost all wealth continues to funnel into the hands of an ever smaller, mostly male, minority. 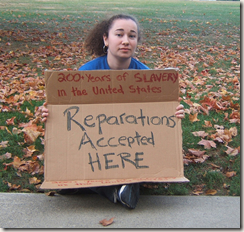 If the money is being produced by women in the first place, this raises a question that I had never thought of until I read her prediction. What about compensation? Tristan believed that women had been robbed over many centuries of their right to at least half of the world's wealth. How can humanity repay such a huge debt? In any court of law it would be found that this wealth disparity between men and women is no accident; undoubtedly, women were intentionally kept back. Surely, this is a great wrong, and they do have a right to reparations. What is more, today's economy is benefitting from a massive influx of money thanks to the full and equal participation of women in the workplace. Now is the time to start discussing this issue.

But what sort of reparations are in order? Even if, as is no doubt the case, the rise of women is only part of the reason why this wealth came into being, it would still be the right thing to do to redirect at least some of the massive profits being made back into the pockets of women, especially to those who remain in an oppressed, downtrodden condition.

It is not difficult to point at sources of revenue for a women's compensation fund. A Tobin tax on currency speculation, for example, would immediately cause an influx of trillions of dollars a year for the fund, while at the same time reducing the volatility of markets by dampening speculation. Taxes on international sales of weaponry, drugs, alcohol and even sugar would also introduce major revenue streams while benefitting humankind as a whole.

Needless to say, such a fund would have to be enforced and administered by a world government, and it would need to leave specific spending decisions to poor women themselves, on as local a level as possible.

Beyond that, the question they might well ask (considering her astonishing economic genius) is how to spend these trillions of dollars in a way that is in the spirit of Flora Tristan? I think that Flora Tristan would have had this money spent supporting women as householders. The home was and still remains the domain of women, though less exclusively now than then. Equalization payments could, therefore, go to introducing automation into domestic affairs, for instance by jump starting a domestic robot industry. This would reduce the menial labour needed for running a home and allow mothers to take on higher level tasks, such as early childhood education.

Of course, the drawback with this course of action is that it would redirect money away from unproductive dead ends of the global economy and towards the most productive root and branch of growth, the homes of the poor. Worse, high technology would stop flowing into the weapons industry and start flowing into homes. As better educators of the next generation, money will be redirected from short term to long term economic stimulus.

The probable result? The poor will get richer and more educated, creating yet more wealth, breaking all past records for prosperity. This might then lead to a realization that women deserve an even higher percentage of the world's goods. Demands for the women's reparation fund would soar higher, perhaps even to the heights that Flora Tristan contemplated: fifty percent of all capital assets. Of course, that just another relic of old fashioned feminism.

Posted by badijet@gmail.com at 3:27 PM