On Haiti and the Day of the Covenant 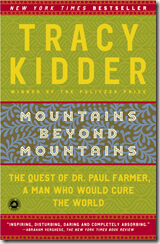 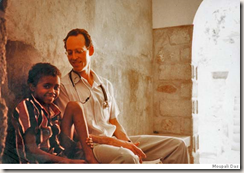 Long ago I read Tracy Kidder's early book about the computer company Data General, one of his first books. Then Kidder turned to themes that were less interesting to me. At our library's annual summer book sale, I came across a recent book by Kidder, called Mountains Beyond Mountains. It is about Paul Farmer, an amazingly saintly American doctor in Haiti who learned Creole, then in the poorest country in the Western Hemisphere invented techniques for controlling difficult-to-handle diseases like tuberculosis and AIDS.

Until he came along everybody thought it was impossible to deal with them in a poor country, and planners blithely left the world's most destitute to die in the dirt. Aside from the ethical issues, this unthinking lack of policy let the disease spread unchecked, and it inevitably spread to what really matters in the minds of rich planners, home, in rich countries.

So effective is Farmer the doctor's approach that it is now the model for epidemiology around the world. What Farmer and his organization, Partners in Health, do is they train local talent to work in their health clinics. They go out on house calls to the homes of anybody who gets sick and, if they judge their situation desperate enough, they see to it that they get a job, a new house, whatever it takes to assure that they will actually take their treatment in its full course, and that they get better before the disease can spread further. This targeted approach nips epidemics in the bud, and takes a major swipe at the scum of poverty as well.

He took the technique to the prisons of Russia (which had become breeding grounds of TB). This proved that Haiti was not an isolated case. His approach works anywhere, it is transferable. This eventually persuaded "smart charity" groups like the Gates Foundation and that of George Soros to finance it around the world.

The local, community-building approach of Paul Farmer reminded me of our local, non-Baha'i Persian physician in Dunnville, Reza Kazemi, who has started a community based organic farm. Every week I go there and pick up fresh veggies from the farm. Anyway, after I finished reading Kidder's book, I passed my copy on to Reza to read. 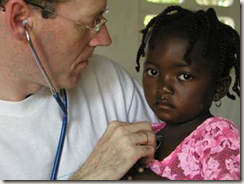 Since I am fascinated with democracy, I chose the following amusing incident that took place when Paul Farmer was in Russia, trying to arrange a loan to pay for TB drugs for prisoners there.

The chief of the Russian doctors -- a colonel -- laughed. A woman doctor said gravely, "We have lots of TB and no labs." More toasts, more vodka. The colonel reached in his pocket, began to take a pack of cigarettes from it, then paused and asked Farmer,

"Is America a democracy?"

"I think whenever a people has enormous resources, it is easy for them to call themselves democratic. I think of myself more as a physician than as an American. Ludmilla and I, we belong to the nation of those who care for the sick. Americans are lazy democrats, and it is my belief, as someone who shares the same nationality as Ludmilla, I think that the rich can always call themselves democratic, but the sick people are not among the rich."

I thought he was done, but he was only pausing for the interpreter to catch up.

"Look, I'm very proud to be an American. I have many opportunities because I'm American. I can travel freely throughout the world, I can start projects, but that's called privilege, not democracy."

As Farmer had talked, the colonel's face had begun showing signs of exertion. Now he let his laughter out. He said,

"But I only wanted to know if you would permit me to smoke a cigarette."

Goldfarb made a face.

"Paul. He wanted to know if he could smoke, and you gave heem a speech on socialism and democracy."

"But the speech was marvelous," said the colonel, smiling at Farmer, who seemed on the verge of falling asleep.

Goldfarb turned to the colonel. "Tomorrow Paul will represent your interests at the World Bank."

"The only thing wrong, I don't think it should be a loan. But for the international community of healers it will be a good thing.

"I pray," he put his hands together in a steeple, "that it will go well." (Mountains Beyond Mountains, Tracy Kidder Random House Trade Paperbacks, New York, p. 229)

I have expressed this opinion before on this blog: if we had real and open democracy, without candidature, if there were any justice in the world (this is just two ways of saying the same thing), then Paul Farmer (and others of his moral caliber) would be elected to the parliament of the Americas, even if he did not "run" for office. Once you get people like him representing us all, then you would see government start doing good, start being good. Farmer is the perfect choice for office. First of all, his activism follows the divine principle of "go for the greatest need." That is why God chose the places that He did to receive His Manifestations.

That, consciously or not, is why Farmer chose to concentrate on Haiti.

Go to the poorest, treat them, and if it works there the treatment will work anywhere. To prove oneself capable of office, one must do so by helping the poorest, most desperate place. Anybody who does not succeed, or does not try, is a poseur, unworthy of the high station of leadership.

For another blogger's view of this book, go to:

Posted by badijet@gmail.com at 3:32 PM