For generations now, streets and intersections in urban areas have been the exclusive domain of thundering trucks and honking automobiles. It is the same in the country. Rural roads are deserted, machine-only zones where any wildlife that wanders onto the pavement rapidly becomes road kill. Pedestrians in the suburbs, when permitted at all, are shunted onto sidewalks that are ugly, smelly and noisy. Meanwhile, annual deaths from traffic accidents are higher than war and terrorism combined. Vehicles own our common spaces, their fumes and cacophony making the Res Publica, the public thing, a wasteland. Our entire built world accommodates this mechanical tyranny. Many new houses are garages with homes attached. Suburban sub-divisions are designed as motorized thoroughfares with housing tacked on as an afterthought. 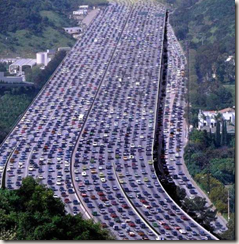 This is not a new phenomenon. Before the machine age, horses pulled an assortment of carriages and wagons through streets, highways and byways. As commerce increased and the population of cities grew from thousands into millions, so did the numbers of horses. In major cities around the turn of the 19th Century, workhorses threatened to bury roads and streets in excrement. As a result, for many decades after cars and trucks took over, they seemed to be a cleaner alternative. Only when smog obscured the horizon and evidence of global warming mounted did the dangers of the less visible and tangible pollution of motorized vehicles become evident.

Bad as the soot and emissions are, perhaps the worst kind of pollution produced by this transportation system is mental, and especially political. The automobile is a singularly isolating technology. It enables drivers to commute the whole route from home to work without a single face-to-face encounter with another human being. Paradoxically, the more crowded traffic is the more isolated are the individuals caught in the deadlock become. Thus cut off, the basic social skills required by democracy are becoming lost arts. Even the most fundamental political quality of all is, the willingness to put the interests of the whole before those of the part, is often forgotten. The result? An atmosphere of selfishness and truculence pollutes the public discussion as badly as the physical air.

Centuries of expulsion from thoroughfares has affected our speech. The word "civilization," started off referring to the good effects of city life, declined from a proud badge of hard won progress to a dirty word. Expressions like "street wise," and "street smarts" have nothing to do with wisdom or philosophic understanding; they refer rather to someone with the cunning to survive in the hostile, crime-ridden wasteland that our city streets have become. The greatest accomplishments of the Ancient world were the result of a different kind of "street smarts."

None living today remember a time when people were not banished from streets, corners and city squares; yet we know that there were times when streets actually invited city dwellers to come there to learn, work and converse together. Vital, high-density settlements allowed citizens to live close by their workplace. Rather than wasting their lives commuting, they had energy and leisure time left over to relax together and engage in open, spirited public discourse. 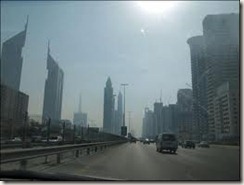 Residents on well-designed streets relished spending their day in a place that offered a full spectrum of activity, from trade to recreation. Teachers gave classes outside, merchants plied their wares and tradespersons their crafts in open air markets; artists and dramatists created great art and the "peripatetic" (walking) philosophers of Athens made memorable discoveries about the human condition in the open street. The Cynics of Hellas and the Stoics and Epicureans in the streets of Alexandria became the first leaders of thought who had a mass audience. The Roman Republic built elaborate public baths, held triumphal parades and built impressive public buildings in the street. Centuries later, the broad streets of Baghdad became an intellectual melting pot of intense activity. Streets in Renaissance city states were just as frenetic, but they exuded a charged atmosphere that inspired great art, literature and the birth of both science and the modern nation state.

Even today, great cities like Paris, London and New York continue to benefit from an older style of mixed use layout. Such great metropolises retain their preeminence by attracting creative people from near and far, and providing them with optimal conditions for discovery. They tend to discourage car ownership by providing integrated, efficient public transit systems. Integrated public transit and mixed use zoning helps foster diversity and creativity in public spaces. 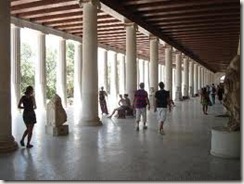 One of the time tested secrets of old fashioned designs was the use of a sort of social insulation that allowed diverse functions to work side by side without interference in a small, dense, high population area. The original name for this insulation was "stoa," which is Greek for "porch." Long before pedestrians were overrun by vehicles, the stoa was not only a "freestanding ... covered walkway" but also served many of the functions that shopping malls do today, except that they were centrally located and very much a part of the Public Thing; that is, they were not privately owned or run. They,

"lined marketplaces and sanctuaries and formed places of business and public promenades. Rooms might back onto the colonnade, and a second story was sometimes added. The Stoa of Attalus in Athens (2nd century BC), a large, elaborate, two-story building with a row of shops at the rear, was a prime example." (http://www.answers.com/topic/stoa)

Throughout the ages the stoa remained the cornerstone of street life. Porches were not restricted to private homes. Public buildings were often surrounded by columns, creating a space where citizens could mix together on neutral ground and discuss public issues. The first stoa were little more than sheds with columns, but they evolved over the centuries and millennia. The stoa became,

"... a roofed colonnade or portico with a wall on one side, erected as a separate building near temples or gymnasia or in market-places as a sheltered place in which to walk and talk or hold meetings. The wall was often decorated with paintings or inscriptions. Thus the Stoa Poikil (painted colonnade) in the agora at Athens, built c.460 BC, was adorned with frescos by famous artists, including one by Polygnotus representing the destruction of Troy." 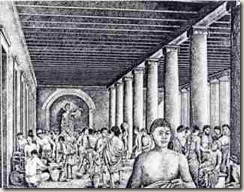 Stoa had a surprisingly great influence not only on art history but also on philosophy and science, especially in Athens and Alexandria. It gave its name, "stoic," to the first philosophy to gain mass popularity throughout the ancient world. The Stoic school was so named because their founder, Zeno, was in the habit of discoursing with his followers in and around the painted stoa of Athens. Eventually stoas served not only business but also acted as a sort of public interface among art, religion and politics.

"Later stoas were often immense, running to two stories, each with a colonnade of a different order and having a ridged roof supported on internal colonnades; rows of shops or offices lined the back wall, which was sometimes decorated with paintings. Such stoas surrounded the agora or marketplace of every large city and were used for public meetings."

The porch on houses is the last surviving remnant of the stoa. Although the garage fronting new homes recognizes the reality before them, the mark of older houses is that they retain a veranda at their front, a quaint relic of an age before air conditioning and electronic screens drew people indoors, a time before motor vehicles spewed carbon monoxide, smog and noise throughout every street and its surroundings. The few porches that remain are mostly used for storage or decoration. Only architectural historians remember that the verandah was once a place for extended families to relax in a cool breeze, converse with passersby and, often, to entertain guests. Porches served as the main transition zone between the public and private spheres. Today only a brave few sit in their verandas, surrounded by ugliness, partly asphyxiated by fumes and smog, their shouted conversations drowned out by traffic.