The Architecture of Terra City

The Architecture of Terra City

As we have seen, for the first century or so the global capitol is called Terra City; it rotates around the planet. Its capitol buildings are entirely utilitarian with no specific style, or even a single, static location. Rather they consist mostly of a building code, a set of open standards and designs meant to be reproduced in new city halls, neighbourhoods and even households around the globe. More than anything, Terra City fits a temporal rather than spatial order, an order based on the schedule of principles in the planning decade. The designated world capitol, Terra City, moves as each decade plan ends to a new continent. The legislators, leaders and other users of the capitol buildings feed their experience back so that the specifications of the next set of buildings will be better each time. 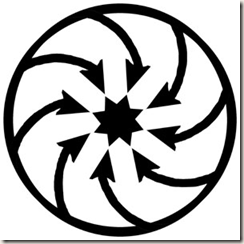 Let us say that a consensus vote among experts and continental parliamentarians for the duration of Decade One settles upon Antarctica as the first provisional location for Terra City. This remote location near the South Pole forces everyone there to concentrate on the global picture, to set up communications networks to link continental parliaments as efficiently as possible. It obliges them to pay close attention to what is essential to the design of the buildings they occupy, and how to improve upon it.

The designers of the first set of highly self-contained structures for capitol buildings in Antarctica will be forced to keep to bare essentials and use the latest, high technology materials. At the center will be a transparent central dome for well-illuminated plenary gatherings during the long days of summer. In the long night of winter, the dome ceiling may be used as a mirror, or perhaps as an Imax-like cinema screen and data display. Such a video display would allow a live link to the eight continental parliaments, allowing, for example, votes among all continental representatives to be held either simultaneously or over a twenty four hour period. 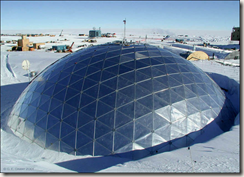 This central dome is surrounded by ancillary buildings, also bolstered by extremely tough exteriors insulated by aerogel or vacuum barriers. Lodging will be Spartan and compact, located within walking distance of offices and meeting rooms, but not so close that occupants will not have to walk around and take in the varied visual stimuli needed for mental and physical health.

Once this core station, dubbed Terra City Antarctica, has been in use for its designated period, the scientists, politicians and spiritual leaders who have occupied it during decade one will move on to their next designated capitol buildings on another continent. Once vacated, scientists will continue to monitor the station's operation and use this experience to determine how soon it will be feasible to assemble a similar Terra City base of operations in orbit, perhaps alongside or connected to the present International Space Station.

Even if financial or technical obstacles block the construction of a complete Terra City station in orbit for several decades, I consider it imperative that everyone elected to continental office spend at least a few days in an orbiting observatory of some kind. The saying goes that "without vision the people will perish;" it is essential that as many leaders and bright young people as possible gain this vision by spending at least a few days just looking down at the planet they propose to manage. Without aggressive efforts to implement massive space tourism, it is unlikely that our first priority, the collective survival of the human race, will ever be heard above the noise of lesser priorities.

Again, the scientists and educators who make up the college of light will use the polls and other data from Decade One to decide upon the technical specifications for the next Terra City station. Like all new buildings, future capitol buildings will be required to have a zero ecological footprint, even though they will be built in much more benign conditions than those of Antarctica. In time for the opening of Decade Two, the second, improved set of global capitol buildings, will be completed at a crossroads of the World Belt somewhere within the continent of Africa, the original home of all humans.

In this scenario Terra City in Africa is the first capitol situated on habitable land, albeit in a desert -- most probably the Sahara Desert. It may take decades of massive tree planting and other terraforming projects to make the climate near Terra City II pleasant enough to attract massive immigration from other places in Africa. But an initially harsh climate will not affect the leaders in their self-contained capitol buildings.

Nonetheless, this time the Terra City project takes on a far more daunting proposition, erecting the core structures of an entire planned city, the core of what will become the capitol of a united Africa. Starting off in an empty desert ample room is left for growth, without land speculation. Once Decade Two is played out, the global parliament and Terra City moves on to a desert in the next continent in line.

The buildings they vacate become the capitol buildings for Africa's continental government, and around the capitol buildings will grow a beautiful city. Since it is Africa's permanent continental center of governance, it might be named thereafter Africa City. From Africa City, the same ultra-efficient, universal building standard of the capitol will spread along the World Belt to neighbourhoods and arteries throughout the continent. With each walkthrough of the decade the standard will evolve closer to the particular culture needs of every region in Africa.

Posted by badijet@gmail.com at 3:55 PM