Be Kind to Your Institutional Friends

We just got back from our weekend at Louhelen Baha'i School, and after that a short visit to my brother, who also lives in Michigan.

While browsing in the bookstore, I happened to come across a statement by the House of Justice to the effect that our society has many prejudices against institutions, and that we, as Baha'is, need to fight against any tendency to "dis" institutions per se. I was very impressed with this brief thesis. Yes, we do put down institutions. What a great book it would make if somebody expanded upon that thesis! Maybe such a book has already been written, I do not know. I hope that my learned readers will point one out to me. 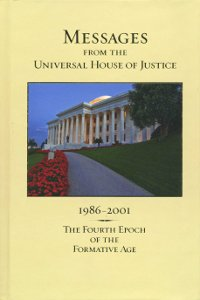 I immediately bought the book in which I had stumbled across this idea and started reading it from the start. It is: "Messages from the UHJ, 1986-2001, The Fourth Epoch of the Formative Age." I have not yet reached the exact passage that impressed me. However, a search through Ocean just now uncovered a very similar passage from the Guardian, also cited by the House. It evidently is from an unpublished letter by the Guardian, (since it is the only location turned up by Ocean).

So, if anybody writes such a book, they would automatically have a blurb from the Guardian, saying that this issue is "most essential to know" about.

This idea that we are unfairly putting down institutions had a special impact on me because, coincidentally, just before we left I had been auditing a book called, "The Company," a history of corporations by a couple of writers from the Economist Magazine. 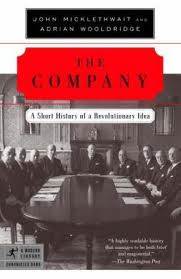 I learned many things, including the fact that non-economic corporations, such as towns, schools and monasteries, are centuries older than the economic corporations who dominate today. The book also points out that economic corporations, which of course are institutions too, often get a bad rap. Sloppy use of statistics makes them appear larger and more powerful than they really are. Often, but not always, they are unfairly demonized. I must admit that I have been guilty of this at times on this blog.

I had also been thinking about this statement of the Master, which implies that, bad as backbiting and gossip about an individual is, it is that much worse to attack an institution.

"Should ye attribute a mistake to a person, it will be a cause of offense and grief to him - how much greater would this be if it is attributed to a number of people! How often it hath occurred that a slight difference hath caused a great dissension and hath been made a reason for division. ... (Abdu'l-Baha, Tablets, Vol. 1, p. 20)

An individual is just one soul, but an institution is composed of many people. Not only that, an institution represents the thoughts and opinions of many more people who are not directly involved in its operations. Often too, the institution serves even greater numbers of people, many of whom depend upon its integrity. 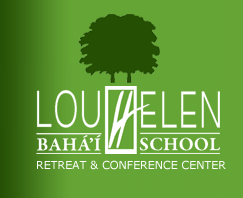 My first night in Louhelen I awoke thinking, if it is true that institutions are being unfairly put down, how do you love an institution? I remembered how the Master often praised institutions in His public talks. Next time I go through His talks, I should mark examples there where He does praise groups as well as souls.

Later, we had a series of drum circles -- a suggested way to supplement one's study circle activities. It was kind of strange, at first, for a non-musical type like me to be banging on a drum or other percussion instrument. Then it became a liberating experience, like a multi-directional conversation where everybody gets to talk and everybody can listen at once to one another, each and all, at once. The good drummers were doing better, of course, but everybody else was contributing. It was a new experience.

Pounding away at my tambourine-like contraption, I thought about what institutional love implies. Yes, soon there will be ways and technologies that will allow institutions to talk directly to the people. Using ARS setups (Audience Response Software is a clicker that allows an entire gathering to respond to questions) an LSA, for example, could engage in a Socratic Dialog with its entire constituency.

Never in history has it been possible to establish such a dialog and relationship between two groups like that. And indeed, if you hook up the question and response with some sort of musical activity like this, who can imagine what might happen? What a beautiful love affair will soon begin between institutions and people.

I once gave a speech about the past being a time when individuals could have a great impact on society (dictators, generals, politicians) but in the post WWII era it is the era of the institution. I was thinking of the Bahai institution. Here in Japan, there is a historical tendency to play up the institution/group and play down the role of the individual. Maybe this is one of the reasons that the US and Japan are currently dancing partners. And perhaps as nationalism runs its course the "smaller" but not necessarily weaker institutions, like the multinational corp. , continues to become yet stronger still. My students are redundantly worried about China, but I feel the Chinese state is like an expanding balloon. If it breaks up there will be a huge number of smaller Chinese institutions that will become liberated upon the world.
regards from Japan,
Thomas